The Metropolitan King County Council gave its unanimous approval to a  2012 King County Budget that continues the Council’s proactive approach to reforming county government while protecting vulnerable populations and increasing the focus on county roads.

Even in the midst of the Great Recession, the adopted $5.2 Billion budget continues to protect the County’s AAA bond rating by not using the County’s cash reserves or tapping the rainy day fund. For the second year in a row, the Council has adopted the budget earlier than anticipated. Traditionally, the Council adopts the King County Budget the Monday before Thanksgiving. The November 9 vote is almost two week ahead of the schedule set by the Budget Chair.  Read more.

Down to the wire on the County Budget 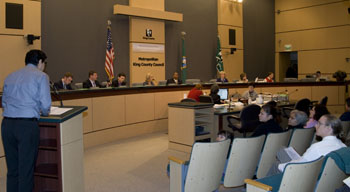 The fees and levy ordinances that help support the 2012 Proposed County Budget were the focus of our last public hearing on the Budget inside Council Chambers on Monday, November 7.

We are in the home stretch of our review of the 2012 County Budget. After receiving the Executive Proposed Budget on September 26, our Budget Committee held three special meetings in Issaquah, Kent and downtown Seattle. More than 100 people testified at those three meetings—today's meeting was the final public opportunity to let us know your budget priorities before we begin work on the final budget proposal.

The Council is working on reconciling all expenses with available revenues. This intensive eight-week process culminates later this month with adoption of the 2012 King County Budget. We encourage you to follow along by visiting our Budget Web site, and to watch all the proceedings on KCTV. 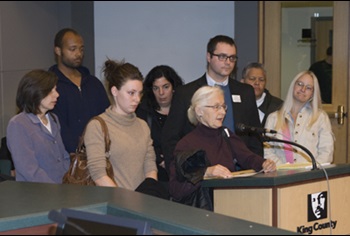 As we reach the halfway point in our budget deliberations, the fees and levy ordinances that help support the 2012 Proposed County Budget will become the focus of our Budget Committee.

After receiving the Executive Proposed Budget on September 26, our Budget Committee hosted special meetings in Issaquah and Kent. On October 25, we held our last special night meeting inside County Council Chambers. We want to thank more than 50 speakers who came to the Courthouse to let us know about their budget priorities--including students from Seattle's Center School, 4H members from throughout King County, and representatives of the the Tenant Union (pictured) who urged us to continue supporting human service programs during this time of increasing need and decreasing funds.

We're gratified by the more than 100 citizens who took the time to meet with us and let our Budget Committee know about their budget priorities here inside Council Chambers as well as the meetings in Issaquah and Kent. Citizen input is vital in the decisions we need to make over the next four weeks.

If you want to view the hearing, tune in or log on to King County Television (KCTV) for the day-after broadcast of the meeting.

The Council has begun working on reconciling all expenses with available revenues. Traditionally, that is also when we begin our review of fee and levy ordinances. Among those for consideration for 2012 are: 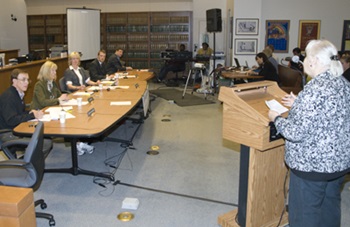 At our second night meeting on the 2012 Executive Proposed Budget, we heard from a number of human service providers who urged the County to do what they could to support programs that aid a wide number of county residents.

Representatives from DAWN (Domestic Abuse Women’s Network) and Healthpoint, which provides health care throughout King County, were among the 25 speakers at the Maleng Regional Justice Center in Kent October 19. The agencies discussed how the need for their services has increased during the Great Recession and that funding from King County is vital in continuing to meet those needs.

We have had more than 50 people testify at our meetings in Issaquah and Kent. Our last night meeting on the 2012 Budget will be on Tuesday, October 25 in Council Chambers, starting at 6:30 p.m. 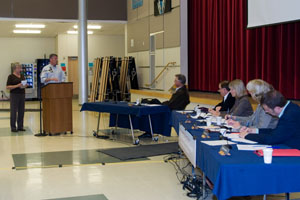 Over 20 speakers came to Pacific Cascade Middle School in Issaquah October 13 to speak to the Budget Committee on a variety of issues.

Concerns regarding county roads, the continued need for public defenders in these tough economic times, and protecting human services such as Food Lifeline and the King County Sexual Assault Resource Center who face an increase of the people needing their services and trying to meet those needs with declining budgets.

This was the first of our three special evening meetings to hear from you about your 2012 Budget priorities. The next meeting will be held in Kent at the Maleng Regional Justice Center on Wednesday, October 19, starting at 6:30 p.m.

On Tuesday, October 4, the three separate panels that will review the Executive Proposed Budget will begin their analysis of the proposal:

• The Public Health and Safety Panel, chaired by Budget Vice Chair Kathy Lambert, will meet on Wednesdays. The panel will assess the Executive’s proposed budgets for law, justice and public safety agencies along with the departments of Community & Health Services and Public Health. 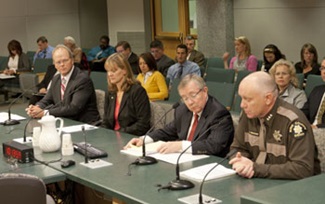 The elected officials responsible for public safety agencies, elections and assessments met with the Budget Committee September 28 as the County Council began its official review of the Executive Proposed 2012 Budget.

All of the electeds understand the challenges facing King County. They told us they are prepared to continue working with the Council in achieving reforms that increase efficiency in the 2012 Budget.

After the Executive's Budget Address, our Budget Leadership Team said that even with the reality of having had to trim $233 million from King County’s General Fund budget over the last four years, the Council’s proactive approach to reforming county government has prepared the Council for the 2012 King County Budget deliberations.

Councilmember Julia Patterson, Chair of the Council’s Budget and Fiscal Management Committee, was joined by Councilmembers Kathy Lambert, Chair of the Public Health & Safety Panel and Joe McDermott, who will chair the Physical Environment Panel. Council Vice Chair  Jane Hague, will be Chair of our General Government Panel.

Today's budget address is the start of an eight-week process of deliberation and review of the King County Budget, with the vote on the spending plan traditionally taking place the Monday before Thanksgiving. You can follow the deliberations through the our 2012 Budget page and on Facebook and Twitter.