The County Council Budget Committee—which is all nine members of the Council during the review and deliberations on the County Budget—today received the Budget Leadership Team’s (BLT) Budget “Striker.” The striker, created by Budget Chair Joe McDermott and Councilmembers Kathy Lambert, Jane Hague and Larry Phillips, is the BLT’s recommended changes to the Executive Proposed Budget.

The Budget Committee will review both documents and prepare to send the strikers to the full County Council for a final vote, which is scheduled to occur on Tuesday, November 12. 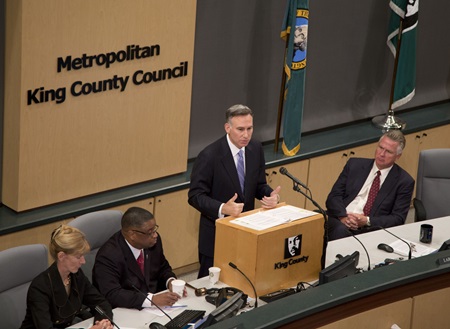 The Council received Executive Dow Constantine's proposed 2014 Budget on Monday, Sept. 23. The Executive’s budget address is the start of an intensive eight-week process of Council review and deliberation.

The budget is a complex policy document that sets priorities, shapes service delivery, and impacts all areas of County government. The Council is responsible for making all final decisions on the budget. For the 2014 Budget, the Council’s deliberations will focus on long-term policy issues given the transition to biennial budgets. Traditionally, the vote on the spending plan takes place in November before Thanksgiving

The Council's Budget Leadership Team remains committed to a transparent budget process informed by public meetings throughout the County: