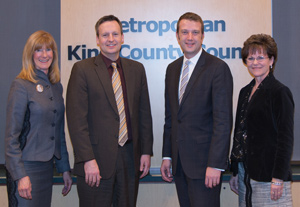 Budget Chair Joe McDermott and the team that directed the budget process.

On November 17, the Council unanimously adopted King County’s first biennial (two-year) budget, a $9 billion spending plan that made difficult choices even as it kept buses rolling and revived a needed program within the King County Sheriff’s Office.

Public Health and Public Transportation were the two dominant issues when the Council received the proposed budget of County Executive Dow Constantine on September 22. Over the 8 weeks between the delivery and the adoption of the budget, the Council’s Budget and Fiscal Management Committee—directed by Committee Chair Joe McDermott, Vice Chair Kathy Lambert and committee members Jane Hague and Dave Upthegrove—crafted a plan that addressed both of those concerns, even as it preserves King County’s AAA bond rating by not using the County’s cash reserves or tapping the rainy day fund.

Partnerships and collaboration between the county, local jurisdictions and other community agencies helped locate the funding needed to keep the clinic doors open temporarily in Federal Way, White Center, and Auburn. The Council’s budget also includes funding to help keep Northshore, the last of the clinics on the closure list, open into the biennium.

Potential reductions in transit service were also a concern going into the budget process, with the Council committed to reviewing both the levels of bus service and transit reserves during the development of the budget. The 2015-2016 Budget funds full maintenance of existing bus service, while keeping adequate reserves in transit. In addition, the budget increases funding for transit’s alternative services delivery program, which provides transit service other than just a full-size (large) bus on a fixed route.

The budget is a culmination of 6 public hearings (4 budget committee hearings and 2 council meetings where they took public comment), 14 budget meetings (split between three budget panels), and the testimony of more than 200 people who spoke about their budget priorities.

The proposal will also keep the public health clinics that were slated for closure throughout open for the next year.

“The budget makes cuts to better align our revenues with our costs. But it also makes strategic investments to help our King County families and communities be secure,” said Councilmember McDermott.

Read more about the proposed budget.

On Thursday, November 13, the Budget Committee—which all Councilmembers sit on during budget deliberations—will vote on the $9 billion proposal created after months of review and negotiations. After the committee vote, the full County Council will act on the plan on Monday, November 17.

Fee and levy ordinances the next steps in Budget deliberations

The Council’s Budget and Fiscal Management Committee is in the last two weeks of its budget deliberations.

The Committee has completed its four special night meetings—held in Fall City, Bellevue, Kent and here at the County Courthouse. A total of 150 speakers testified at the four meetings, and they spoke about a wide variety of budget priorities, including economic development, continued funds for programs that assist survivors of domestic violence and sexual abuse, protecting services that aid individuals within the criminal justice system and keeping the public health clinics facing closure open.

The Budget Committee is now in last stages their committee work that includes the reconciling all expenses with available revenues as well as reviewing the fee and levy ordinances for King County’s first biennial (2015-2016) budget. Those include:

A process that began September 22 with the Executive delivering his proposed budget has a few more steps before the Council votes on the final County Budget:

• On Monday, November 10, the public will have a final opportunity to tell the County Council their budget priorities when they will hold a special meeting to hear from you. The meeting will start at 11:00 a.m.
• During that meeting, the Council will vote on a number of the fee and levy ordinances necessary for the budget;
• That week, the Chair of the Budget Committee will be joined by three other members of the committee in presenting their budget proposal—called a striker—with the expectation that final action on the budget will be taken by the Council on Monday, November 17.

Even this late in the process, your input is vital to the final plan. We encourage you to continue to follow this process by visiting our Budget Web site, watching the proceedings on King County Television, and sending us your comments through email, Facebook and Twitter (#KCBudget).

The county budget represents the single most important document through which the Council sets policy for county government and oversees the prioritization and delivery of critically important services. The Council received the Executive’s proposed budget on September 22. We will spend the next couple of months reviewing, refining, and amending the proposed budget, with the goal of moving forward with a final vote in November.

This year is the first time that all county agency budgets are on a biennial or two-year cycle. In 2003, the voters approved a charter amendment authorizing King County to implement biennial budgeting. Since then, King County has slowly been converting its agencies from one to two-year budgets. As a result, when comparing to previous annual budgets, some appropriations may appear to be significantly higher.

The Council's budget and Fiscal Management Committee will hold four public meetings in north, east, and south county, as well as downtown Seattle, at which the public may comment on the proposed budget.

Learn more about the King County budget and the challenges the County faces by reading the budget basics pages.