The biennial county budget is the single most important document through which the King County Council sets policy for county government and oversees the delivery of services you need and expect. This “big picture” look will help you understand how the King County budget works.

The budget process begins with County Executive submitting his proposed budget to the King County Council in late September. The Council then holds a series of public hearings and panel meetings to scrutinize the proposal and develop its own. The Council traditionally adopts the final county budget before Thanksgiving.

Note: The following information, including affiliated web pages, provides a general understanding of the King County budget. Specifics, such as numbers and percentages, vary slightly from biennium to biennium.

The county budget is composed of two types of funds: dedicated funds and the General Fund. Dedicated funds are the largest portion of the county budget, at about 83% of the total budget. These funds include contracts for services, fees, and levies that have been collected for specific purposes and must be allocated by law toward those purposes. For example, bus fares must go towards paying for transit, sewer fees towards paying for wastewater treatment, and the voter-approved EMS property tax levy to funding Emergency Medical Services.

There is more flexibility in the General Fund, which is about 17% of the total budget. This fund pays for the traditional functions of county government, such as the Sheriff's office, and critical day-to-day services that are not supported by dedicated revenues. hree quarters of the general fund (75%) goes to support state-mandated criminal justice and public safety services. The remainder pays for other programs, such as health and human services (see pie chart below. Please note that this chart shows the general relationship between the categories, not the exact numbers for this biennium). 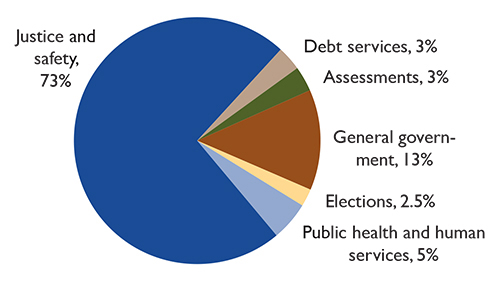 Funding the services you receive

The General Fund and the many services it provides to county residents is supported by two principal sources of tax revenue: property tax and sales tax.

Where your property tax dollar goes 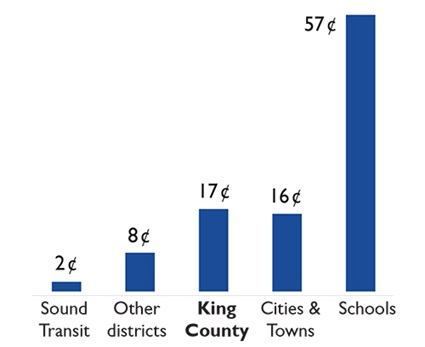 King County residents pay an average sales tax of 10 percent. The state keeps 6.5 percent; 1.4 percent goes to Sound Transit and 0.9 to Metro Transit; 0.2 percent is set aside for criminal justice, and mental health and substance abuse services; and the remaining 1 percent is split between cities and the County. (See graph below.)

Where your sales tax goes 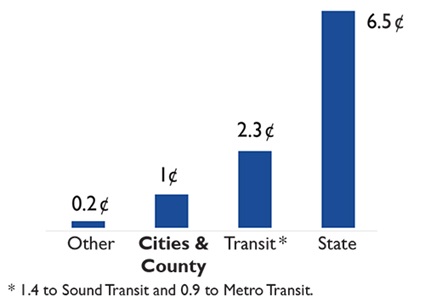 Structural gap, or why is there a budget shortfall?

King County is now the 12th most populous county in the nation, with about 2.2 million residents, and King County government is the second largest provider of public services in Washington State.

In addition to the services they usually provide to residents, counties have had to fill the gap as federal and state governments have made significant reductions to their support of vital human services and left other critical needs unfunded. These service responsibilities have come without additional funding from the state or other sources to meet the expenses they incur.

By voter initiative in 2001, subsequently passed into law by the Washington State Legislature, the amount of property taxes levied by counties can increase by only 1 percent per year, plus revenue from new construction. As a result, revenues counties receive grow at a much lower rate than the cost of maintaining services to residents. This gap is called the “structural gap.”

The chart below illustrates how this structural gap creates an ever-widening deficit between the cost of maintaining the same level of services and the lowered revenue the county receives. In years with a recession, this gap widens further, as revenues remain flat or decrease. The insidious result of the structural gap is that King County becomes unable to provide the same level of services as in the previous year, requiring continuous cuts to essential services to residents.

King County is not alone in this situation. Counties across the Washington State face the problems created by this structural gap.

Effect of the structural gap

After the cap on property taxes was put in place, King County revenues grew by 2-3 percent a year, buoyed by the region’s construction boom. However, the rising cost of providing the same level of public services went up by 4 to 6 percent a year. The structural gap was worsened by the global recession of 2008-10. In the past several years, the County has been able to contain growth in costs to about 3.5 percent a year through various cost saving measures. However, such cost saving measures have been nullified by the global recession due to the COVID-19 pandemic and historic inflation.

In the past decade, predicted deficits, or difference between revenues and costs, have forced King County to cut a few hundred million dollars in services. Such deficits must be addressed by the County Executive when he presents a balanced budget, as required by law, for review and approval by the County Council.

How can the budget deficit be eliminated?

In the short term, the County must make difficult decisions to balance its budget, as counties are required by law to adopt a balanced budget. In the long term, this structural gap between revenues and costs of county services can be resolved only through the collaboration of the State Legislature, counties, and voters.