The largest single impact on King County's 2021-22 biennial budget is the economic fallout from the ongoing COVID-19 pandemic. The county budget also continues to be impacted by a structural deficit in revenues.

King County was the epicenter of the COVID-19 outbreak in the U.S. Since the first known case was identified here, however, the impacts of the pandemic have reached far beyond our borders and in a multitude of ways. One of those impacts is that the need for social distancing and avoiding large groups of people has triggered a worldwide recession. Unemployment has soared, many businesses have been wiped out, and the continued uncertainty makes it hard to predict what the economy will look like in the coming years.

Here in King County – as everywhere – the revenue sources for funding government services have been drastically impacted. Sales tax revenues have declined significantly as a result of this curtailed economic activity and forecasting future revenues is fraught with uncertainty. At the same time, our government has been called upon to provide services to help not only those directly impacted by COVID-19 through illness, but also those who have been impacted financially or in other ways. Many of those costs have or will be reimbursed by federal funds from the CARES Act, but those funds expire on December 30 and no new federal funds have been appropriated.

The combination of reduced revenue and increased cost creates one of the most challenging budget scenarios in recent history.

King County’s General Fund budget shortfall is a structural problem. The word “structural” is used to indicate that the crisis is a long-term problem caused by the structure of general fund revenues and expenditures. It is not a short-term problem caused by the downturn in the economy, although the size of the budget cuts required is exacerbated by economic downturns and other factors.

The insidious result of the structural gap is that the County becomes unable to provide the same level of services as in the previous year, requiring continuous cuts in the level of essential services to residents.

Simply cutting the level of expenditures or finding new revenues does not solve the structural problem, unless these actions increase the long-term growth of revenues and reduce growth in expenditures. The graph below illustrates the problem. 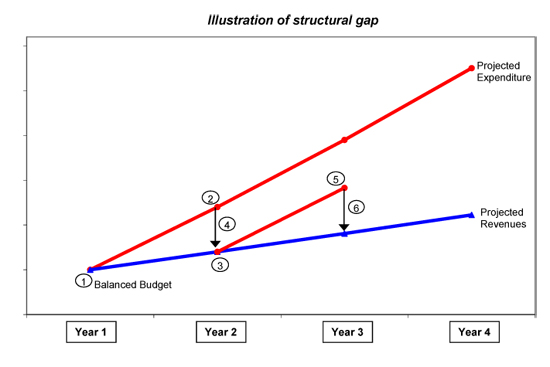 (1) Budget is at balance in Year 1 with expenditures equal to revenues.

(2) With expenditures growing at about 3.5%, the cost of offering the same programs in Year 2 grows to here.

(4) The difference between expenditure and revenue growth leads to a gap, requiring a cut in expenditures to balance the budget.

(5) If the budget cut affects only the level, but not the growth of expenditures, remaining expenditures will continue to grow at about 3.5%. The level of expenditures needed to provide the same level of services as in the previous year grows to here.

(6) This structural difference in revenue and expenditure growth creates the need for another budget cut in the following year (Year 4). The problem continues until structural changes can be made that match the growth rates of expenditures with revenues.

The structural gap is not confined to King County. Counties across Washington State face this continuing challenge between expenditures that increase at a much higher percentage than the revenues the county can collect.


Other factors affecting the budget shortfall

There are several factors that have led to or exacerbated this structural problem. Factors on the revenue side include:

Factors on the expenditure side include:

The Council and the County Executive have adopted or advanced several measures to resolve the budget crisis in the county’s general fund. But these measures do not eliminate the structural gap and the magnitude of its effect. The problems created by the structural gap can be resolved only through collaboration of the State Legislature, counties, and voters.