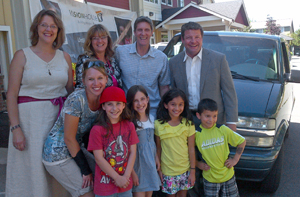 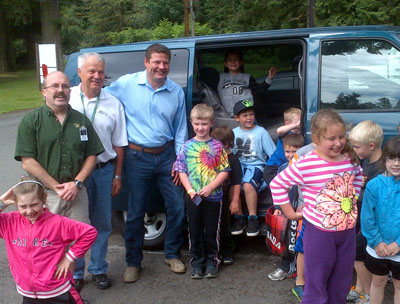 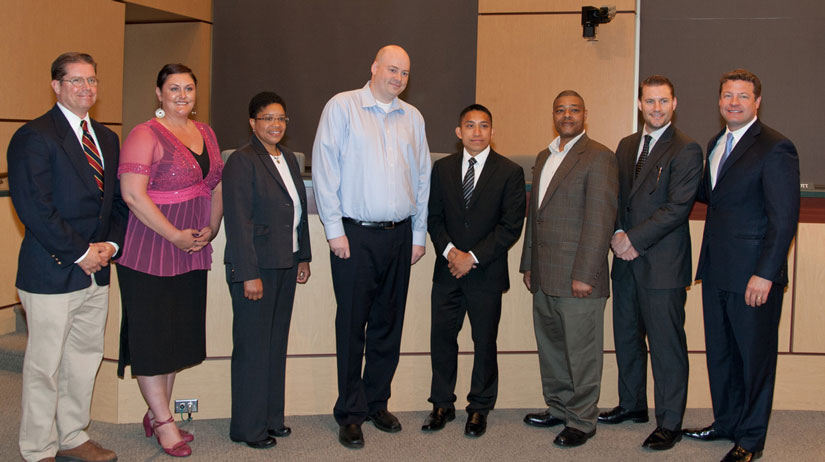 A project for the students of Renton’s Liberty High School became a reality today as the Metropolitan King County Council unanimously adopted legislation renaming the street in front of their school “Patriot Way.” Read more here. 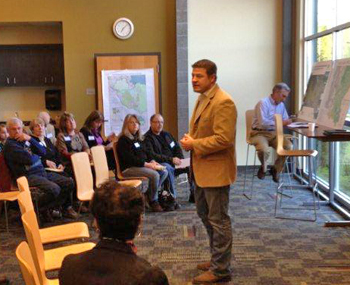 I was joined by King County Department heads at four Town Hall style meetings over the last four months.

These meetings provided the opportunity for residents of Southeast King County to discuss County services as well as other issues facing the County and their community. 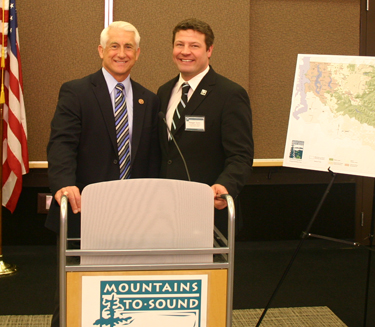 On April 30 I attended a press conference announcing that Congressman Reichert has sponsored and submitted the Legislation that would designate the Mountains to Sound Greenway as a National Heritage Area.  I previously sponsored a Motion on this issue that passed the Council unanimously calling on Congress to take up this important Legislation. Read the press release here.

Read our statement from this press conference here.

The Metropolitan King County Council gave its unanimous support to a study that will look at creating a memorial to recognize fallen deputies within the King County Courthouse. Read more 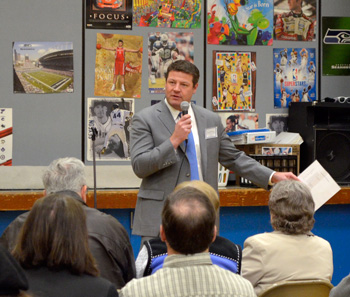 I was joined by King County Sheriff John Urquhart for a special Town Hall meeeting April 4 in the Fairwood Neighborhood.

The event provided the opportunity for residents to discuss County services as well as recent events in Fairwood and to ask questions of elected officials and King County department representatives. 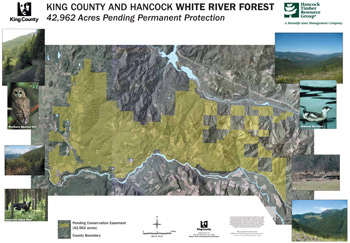 This proposal would ensure that the White River Forest remains a working forest that encompasses all the economic and conservation principles that are important to thriving forest lands.

Councilmember Dunn recently wrapped up his State of the County Addresses for 2013.   Reagan visited the eight cities in Council District 9 and delivered his address to each city council.

Recently, I sent aletter of support to the King County Conservation Futures Citizens Oversight Committee expressing support for the purchase by the King County Parks Division of a 216-acre tract of land on Squak Mountain near Issaquah.

The tract is one of the few large tracts of timberland on Squak Mountain left to be purchased.  This purchase would connect Cougar Mountain to the Cougar/Squak Corridor, both publically owned pieces of land. 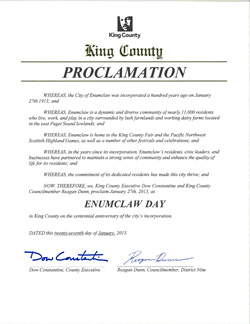 The City of Enumclaw recently celebrated their centennial. I was happy to present a proclamation at the celebration. Read the proclamation. 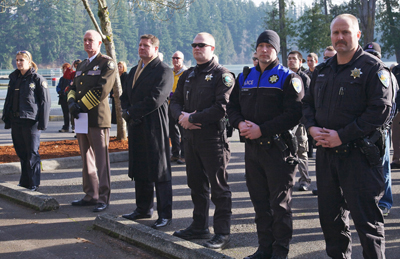 It is truly a privilege to help dedicate this new memorial for Sergeant Hicks and Detective Raburn, two heroes who lost their lives in the line of duty protecting the community they both so admirably served.

These men will not be forgotten and this memorial is a fitting tribute to their lives and to the work they did on behalf of the residents of King County. Read more

In response to a motion introduced by Councilmember Dunn and unanimously passed by the King County Council in October, King County today launched a countywide campaign to raise awareness of the problem of human trafficking in our community. The campaign includes ads on 200 Metro buses that will begin to appear on Friday, a public service announcement, and a program to train key County staff to recognize and respond to human trafficking situations.  Read more.

Watch a video of the news conference announcing the campaign. 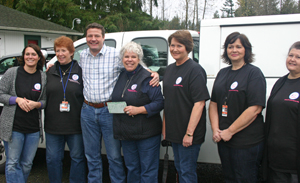 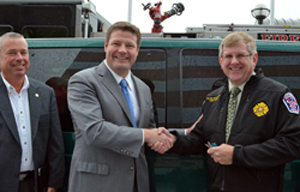 I am very pleased to partner with the Renton Fire Department and their Explorer program and hand over this great looking van to this worthy organization. This van will help them better facilitate the program and teach local youth about the importance of serving their communities. Read more

Metropolitan King County Councilmember Reagan Dunn and Councilmember Larry Phillips today released a letter they sent to Sound Transit calling on the agency to work collaboratively with King County in supporting the anti-human trafficking campaign that will launch in January.

A motion introduced by Councilmember Reagan Dunn is urging the King County Sheriff’s Office to study ways to protect the public from an emerging trend: cyberbullying.

“In recent months, all across the country, we have seen tragedies unfold as a result of cyberbullying,” said Dunn, lead sponsor of the motion. “This motion will allow the Sheriff’s Office to study this issue thoroughly and ensure King County has a plan to deal with any of these troubling bullying trends.” Read more

King County's Sikh community held a candlelight vigil in Renton in mid-August to remember the worshippers killed in Wisconsin on August 5.  Six people were killed during a ceremony taking place inside their temple. Read more 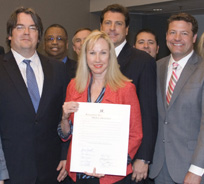 On July 23, the King County Council recognized the television show “Washington’s Most Wanted” on their recent assistance in capturing their 300th fugitive.

“This show has been a huge success here in King County and all throughout the Pacific Northwest,” said Councilmember Reagan Dunn, the sponsor of the recognition. “The work this program does in assisting law enforcement officials is tremendous public service and the show and all involved deserve our highest praise.”

Washington’s Most Wanted began in partnership with Crime Stoppers of Puget Sound in November of 2008. The program, which is based in Seattle, has expanded to include Fox Broadcasting affiliates in Spokane, Yakima, and the Tri-Cities, and the CW affiliate in Portland, OR. Read more...

The Metropolitan King County Council unanimously approved a motion calling for the County Executive to embark on a human trafficking public awareness campaign.

The motion calls for using King County Transit Division public service advertising to help inform the public about these crimes and to let victims know about the resources available to help them. Read more...

Community and business leaders and trail enthusiasts joined officials from the King County Flood Control District, King County, and the city of Kent to celebrate the removal of giant sandbags that have been lining the Green River Trail since 2009.

The approximately 3-foot high sandbags were installed to provide extra flood protection to the cities of Kent, Auburn, and Tukwila after the 2009 announcement by the U.S. Army Corps of Engineers that severe flooding was possible due to a damaged Howard Hanson Dam embankment. The Corps announced last fall that they are once again operating the dam at full capacity. Read more...

Honoring officers who have made the ultimate sacrifice

On May 14, the Council adopted a proclamation I sponsored declaring May 13-19 "Police Week" in King County, recognizing police officers throughout America who have lost their lives in the line of duty. King County Sheriff Steve Strachan joined us in honoring the 15 King County Sheriffs Deputies who are among the 94 members of law enforcement in King County who made the ultimate sacrifice. 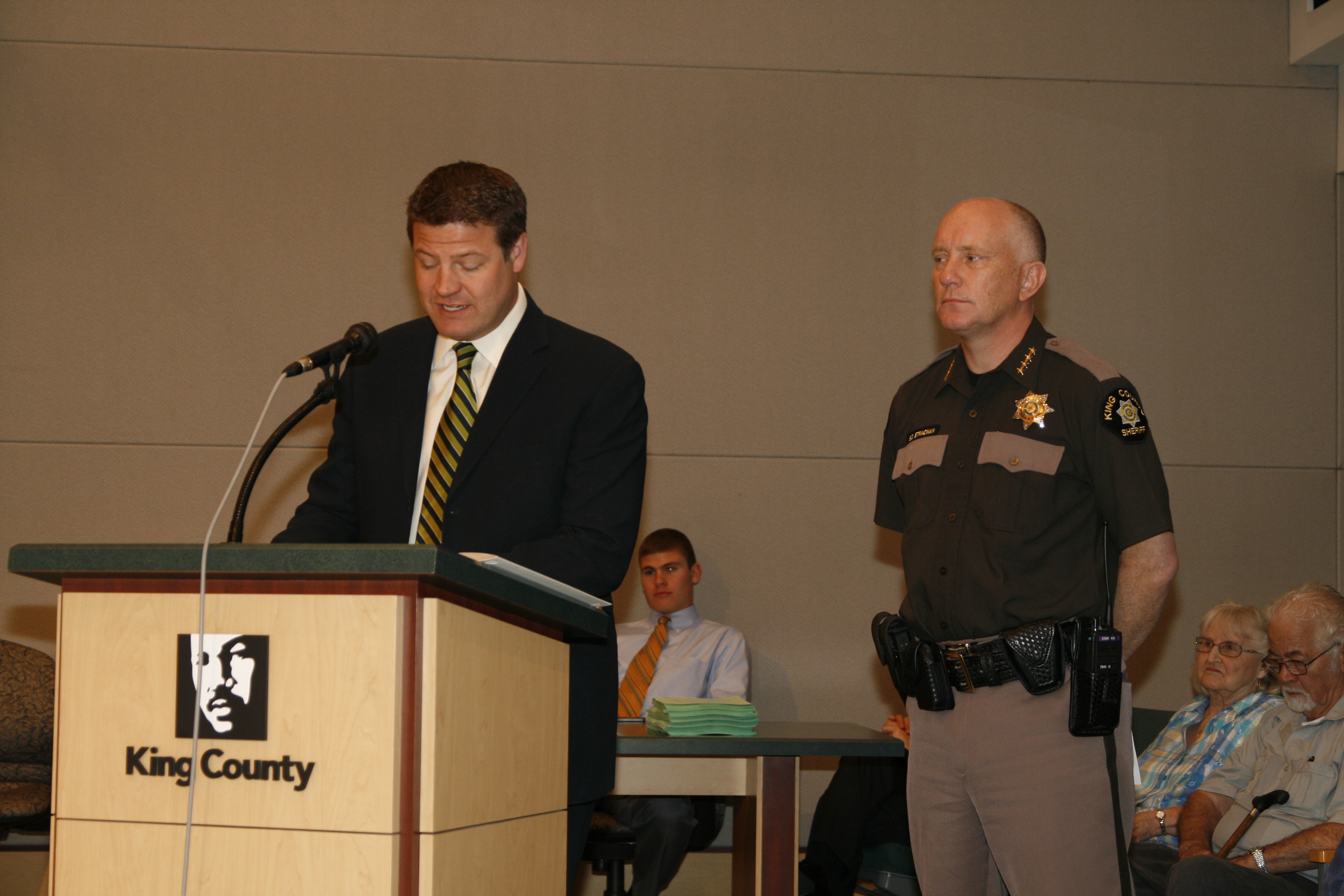 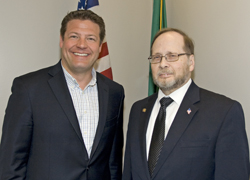 The Metropolitan King County Council gave its unanimous support  to a motion calling on King County to explore ways to tap the skills and knowledge of a vital and underutilized group: Veterans.

“It is my hope that a veterans internship program will benefit not only those returning from the Iraq and Afghanistan conflicts, but all veterans who have gained such tremendous skills defending our county, but unable to find employment with those skills,” said Councilmember Reagan Dunn, prime sponsor of the motion. “This is an opportunity to create a regional model for public and private employers that can increase employment opportunities for these heroes who protect our freedom.”  Read more