“As a mother and grandmother, I have seen the research and recommendations for SIDS prevention develop over the years,” said Councilmember Lambert. “Because SIDS deaths continue to occur, it is so important to educate parents of infants about prevention methods. Providing a safe sleep environment – in a crib with no blankets, toys, bumpers or bedding – is one of the most important things that parents, grandparents and caregivers can do to keep their infants safe and healthy.”

The proclamation notes other risk factors that have been identified by researchers, including tobacco smoke exposure, overheating and sleeping face down. Babies should be placed on their backs to sleep.

Councilmember Lambert congratulated the King County Sheriff’s Office and the Northwest Infant Survival Alliance-SIDS Foundation on their partnership to provide cribs for free to parents in need of a safe sleep environment for their infants. Grants and donations to the Foundation provide the funding for the portable Graco cribs, and the Sheriff’s Office will identify families in need through deputy contacts and deliver the cribs.

“Our front-line first responders often have the first contact with parents in crisis or experiencing hardship,” said Councilmember Lambert. “Thanks to the new Cribs for Kids program, sheriff’s deputies now will be well equipped to provide for the needs of parents for a safe sleep environment for their infants. I would like to thank and commend the King County Sheriff’s Office and Sheriff Rahr for implementing this program and providing another valuable tool in the ongoing drive to end SIDS deaths.” 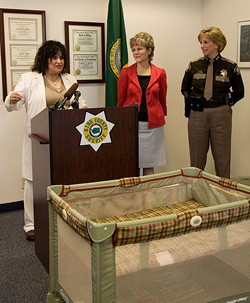 In recognition of Sudden Infant Death Syndrome Awareness Day April 24, Deborah Robinson of the Northwest Infant Survival Alliance, King County Councilmember Kathy Lambert and Sheriff Sue Rahr present one of the portable cribs that will be distributed to families in need of a safe sleep environment for their infants.