The elected leaders of King County’s criminal justice system this morning stood with the Budget Leadership Team of the Metropolitan King County Council to release a preliminary 2010 budget that cuts costs and makes targeted efficiencies in order to preserve nearly all current funding for public safety and criminal justice and avert threatened cuts to Metro bus service.

The overall budget proposed for adoption by the full Council on Monday contains no net new taxes and, at $5.001 billion, is $12 million lower than the $5.013 billion proposed by the County Executive.

The budget plan cuts 311 full-time equivalent employee positions (FTE’s), 60 more than that proposed by the Executive.

“We left no stone unturned to come up with a responsible and humane budget,” said Budget Chair Larry Gossett. “Through reprioritizing, we’ve ensured that King County will be able to carry out our mandated services in 2010 while continuing services for those most impacted by the worst recession in a generation.”

“Working together, we developed a budget that is responsible and will maintain service levels for programs that people rely on,” said Budget Vice Chair Jane Hague. “This budget will allow Metro bus service to continue at a level that will keep people on the move and allow our economy to grow.”

“Our proposed budget is a responsible plan that will keep deputies on the streets, supports the mental health and drug courts that have proven to be successful alternatives to incarceration and recognizes that farming and agriculture has a vital role in King County,” said Councilmember Kathy Lambert. “This could not have been accomplished without the collaborative efforts of our separately elected officials and an Executive who allowed the most transparent budget process in decades.”

“We can share good news today, but only because we prioritized funding for domestic violence and sexual assault programs by reprioritizing dollars from other critical programs,” said Councilmember Julia Patterson.

The so-called “budget striker,” a 130-page document that strikes the text of the budget proposed on September 27 by the Executive, preserves criminal justice services and programs that prevent domestic violence and sexual assault by:

• Using $3 million set aside in the Executive Proposed Budget to transition the County out of animal sheltering services, and $1.2 million in fund balance from the county’s Facilities Division,

• Reducing the County Council’s own budget by 13 percent and cutting seven positions, four of which were filled at the start of this year,

• Reducing the budget for the Executive’s office by 10 percent,

The savings enabled budget writers to limit any reduction to the criminal justice system to no more than one percent from 2009 levels. The funding will support continuation of:

• Sheriff deputy patrols and law enforcement activities necessary to maintain public safety in the unincorporated areas and the region as a whole.

• Probation services that protect the public while reducing the costs of incarceration.

• Targeted enforcement programs by the Prosecuting Attorney that have led to significant reductions in auto theft, burglary, and gun violence.

• Alternatives to incarceration that help keep people out of the criminal justice system,

• Funding for the King County Law Library within the Maleng Regional Justice Center, a vital service for the accused who choose to defend themselves, and their families.

“This year, the District Court endured significant cuts to its budget, so I am delighted that the Budget Leadership has prioritized mandated government services for 2010,” said District Court Presiding Judge Barbara Linde. “This budget will preserve services that are vital such as probation supervision for our most high-risk offenders and will allow us to make the mental health court program available throughout King County.”

“I understand the difficult position the Council faced this year and I appreciate the approach they took in reaching out and listening to not only the criminal justice agencies but to citizens,” said King County Sheriff Sue Rahr. “Residents from unincorporated King County turned out in record numbers this year to encourage the Council to prioritize public safety and I’m happy to say this Council listened to them.”

“We are in a much better place than where we were last year, when we took a 7 percent reduction and lost 27 positions,” said King County Prosecutor Dan Satterberg. “While we are facing a 1 percent across the board cut, we will not have a furlough, which affects our productivity. We have what we need to get our work done in 2010.”

The budget proposal would preserve 200,000 hours of annual bus service by implementing cost-saving efficiencies first identified in September by the Council-directed Transit Performance Audit. Together with recent tax-neutral actions to cut the King County Ferry District property tax assessment, approve a property tax levy for transit, and adopt a Metro proposal for a small fare increase in 2011, the Councilmembers were able to preserve the 310,000 hours of bus service that had been threatened and Metro service would remain at current levels over the next two years – despite the recessionary drop in the sales tax revenues that support Metro which led the Executive to propose a 9-percent across-the-board cut to bus service next year.

Among the efficiencies Metro would implement under this budget proposal are:

• More efficient scheduling of buses and operators, in part by reducing the amount of time buses lay over at the end of each trip.

• Scheduling bus routes based on the system as a whole, rather than the current practice of scheduling routes within one of Metro’s seven regional transit bases, which will help reduce the “deadheading” that occurs when buses return empty to their home bus base at the end of each operator’s shift.

• Increased training and use of Metro’s scheduling software to identify more opportunities where one bus and operator could more efficiently handle routes.

• Use of $40 million over the next two years from Metro’s Fleet Replacement Fund, which the Council audit revealed holds excess reserves of $105 million.

• Deferral of proposed capital projects, and adjustment of the cleaning schedules for buses and the maintenance schedules for transit shelters and Park and Rides.

• Cutting 43 positions that are not related to bus service, 39 of which are unfilled.

• Authorization for Metro to sell advertising “bus wraps” that include a 15-inch wide strip along the windows, so that riders can retain an unobstructed view out of the bus.

The full Council is set to adopt the 2010 King County Budget on Monday afternoon, November 23. 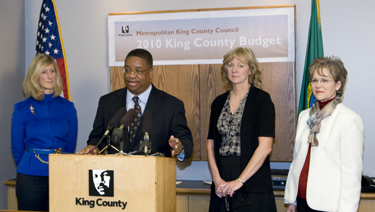