Will serve until November general election

The Metropolitan King County Council today gave its unanimous support to the appointment of former Seattle City Council President Jan Drago to fill the vacancy created in County Council District 8 when Dow Constantine was sworn in as County Executive.

“I am honored to be selected to serve the people of District 8,” said Drago shortly after her swearing-in by Superior Court Presiding Judge Bruce Hilyer. “I look forward to working with the Council and the communities and neighborhoods that make up the district on the challenges that we face this year.”

Drago will act as a caretaker in District 8, serving until the certification of the Nov 2010 general election when the new Councilmember for the district will be sworn in.

“Jan Drago is an experienced public official and policy-maker, and I look forward to working with her,” said Council Chair Bob Ferguson.

“Jan will make a wonderful addition to the King County Council,” said council Vice Chair Jane Hague. “She knows the issues facing District 8 and will hit the ground running to serve her constituents well.”

“Jan Drago has a distinguished career serving our community, having been elected to serve Seattle residents four times,” said Councilmember Larry Phillips. “I am confident she will represent the citizens of District 8 well until they have the chance to elect their permanent representative this fall.”

“The residents of King County will benefit from Jan’s experience, especially when it comes to addressing the 2010 budget,” said Councilmember Pete von Reichbauer.

“I was looking for an independent minded person who could work with all of my colleagues,” said Councilmember Reagan Dunn. “With Jan Drago we get that and a wealth of local government experience as well. I'm pleased to welcome her and look forward to working with her between now and November.”

“Jan Drago is an experienced local leader and I look forward to welcoming her as a colleague on the King County Council,” said Councilmember Julia Patterson.

“I look forward to working with Jan Drago on the many complex issues facing King County, “ said Councilmember Larry Gossett. “I am sure that Jan will serve her constituents well over the next 11 months.”

“All the candidates we considered were very qualified,” said Councilmember Kathy Lambert. “We are fortunate to have such talented, informed leaders to choose from. After working with Councilmember Drago at the City of Seattle, I am confident that she can hit the ground running and offer her considerable government and business experience to the County. We appreciate her budget expertise and familiarity with the issues facing King County.”

Drago was selected out of the 11 applicants who applied to replace Constantine. All of the applicants were interviewed by a 12-member advisory committee of community leaders and elected officials who live or work in Council District 8. The advisory committee sent the Council Drago as well as the names of three other candidates:

The committee stressed Drago’s proven ability in budget, transportation and labor matters, her strong regional relationships and the potential to strengthen partnerships with the city of Seattle because of her time on the city Council. 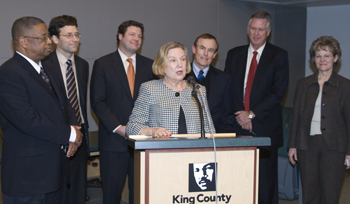 Flanked by several of her new colleagues, Jan Drago speaks after being sworn in as the newest member of the Metropolitan King County Council