On this day in 1910, the men of Washington State voted nearly two-to-one in favor of granting women the right to vote, ending a 50-year battle for equal rights and marking the start of a century of women’s leadership in Washington. Today, the Metropolitan King County Council recognized this milestone in history by declaring November 8 Washington Women’s Suffrage Centennial Day in King County.

“Washington women today owe a lot to the women--and men--who fought for our rights a century ago,” said Councilmember Jan Drago, who sponsored the proclamation. “Just think how far we’ve come in the last 100 years. None of it would have been possible without those pioneering women who suffered ridicule and harassment but never gave up the fight for equal rights.”

“In the last century, women have played an important role in government not only as voters, but also as candidates, advocates and electeds,” said Councilmember Julia Patterson. “I was pleased to be able to recognize the many outstanding women who have helped shape the growth of this great County, including those who have served on the King County Council.”

“It is a source of pride for our county and state that we were and continue to be leaders for involving women equally in civic life,” said Councilmember Kathy Lambert, a former state legislator. “For 12 years, from 1993 to 2004, Washington State ranked Number One in the nation for the percentage of women legislators. I had the honor of serving in the state House of Representatives during this period, when women made up more than 40 percent of the Legislature. This opportunity for women came about because of one man who cast the deciding vote in the 36th state to ratify the 19th Amendment – Harry T. Burn of the Tennessee General Assembly – all at the request of his mother.”

Washington was the fifth state in the union to enact women’s suffrage, nearly ten years before women won the right to vote nationwide with the ratification of the 19th Amendment to the U.S. Constitution in 1920.

The Councilmembers were joined at today’s recognition by past and present female officeholders:

Councilmember Drago presented the proclamation to representatives of the League of Women Voters, a group that was formed to support the ratification of the 19th amendment to the U.S. Constitution, and continues today to advocate for women’s role in shaping public policy and exercising their right to vote.

“We are very grateful to the King County Council for recognizing this special day,” said Allison Feher, President of the League of Women Voters of Greater Seattle. “We strive to carry on the tradition started by those brave women one hundred years ago, and encourage every eligible woman to exercise her civil rights and vote.”

WHEREAS, November 8, 2010, marks the 100th anniversary of women’s right to vote in Washington State; and

WHEREAS, Washington women activists, as well as women from around the country, fought for and won the right to vote in Washington State on November 8, 1910, making it the fifth state in the union to enact women’s suffrage, nearly ten years before the ratification of the 19th Amendment to the U.S. Constitution, which established women’s suffrage nationwide; and

WHEREAS, the struggle for women’s right to vote in Washington State was a long and hard fought battle that spanned more than 50 years, with women’s suffrage being enacted earlier by the Washington Territorial Legislature in 1883 and 1888, only to have these decisions overturned; and

in King County and encourage all county residents to commemorate the achievements of the women who fought for the right to vote 100 years ago, and to celebrate the contributions that King County women have made to public and private life during the last century.

DATED this eighth day of November, 2010. 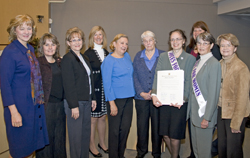 The women of the King County Council are joined by representatives of the League of Women Voters after the Council delcared November 8 Washington Women’s Suffrage Centennial Day in King County.