As students across King County start returning to school, the Metropolitan King County Council today joined the effort to remind young people about the dangers of tobacco. The Council proclaimed September 6-10 “King County Quits!” Week to encourage students to make good choices when it comes to smoking and to raise awareness of the help available to those who want to quit smoking.

“We have an obligation as parents and community leaders to help our young people make the right choices in their lives and that's what this proclamation sets out to do,” said Councilmember Reagan Dunn, sponsor of today’s proclamation. “Quitting smoking isn't easy—just look at all the products that are on the market to help adults quit. Our goal is to make sure that young people and their parents have the best available information to help them choose not to start smoking. If they are smoking, we want them to know there is help out there to quit—that they don't have to go it alone.”

The proclamation was presented to Laura Keller, Advocacy Director for the Northwest/Pacific Region of the American Diabetes Society. The County Council joins Governor Gregoire in raising awareness about teen smoking. The Governor signed a proclamation in August declaring the second week in September “Tobacco free Teens Back to School Week.”

“I was astounded to read that over 45 teens in our state begin smoking every day and that nearly 8,000 people in our state die every year from smoking related illnesses,” said Dunn. “With the support of the American Diabetes Association, the American Cancer Society, the Heart Association and the Washington Health Foundation, we have a really good chance to make a serious impact on teen smoking and reduce it by half over the next 10 years.”

WHEREAS, one in five high school seniors in King County smokes; and

WHEREAS, nearly 8,000 people die each year in Washington State from smoking-related illnesses, and smoking adds nearly $2 billion to annual health care costs in the state; and

WHEREAS, every household pays $627 annually to cover state and federal costs related to smoking; and

WHEREAS, lifetime savings in tobacco-related health expenditures for every former smoker total more than $20,000; and

WHEREAS, there are more ways than ever to quit smoking, including the Washington State Quit Line, working with your doctor, support groups, nicotine replacement, and other options; and

WHEREAS, some health insurance providers like Group Health will cover the cost to quit smoking; and

WHEREAS, the recent increase in state cigarette tax is just one more incentive to quit;

NOW, THEREFORE, we, the Metropolitan King County Council, proclaim the second week of September 2010 as

DATED this seventh day of September, 2010. 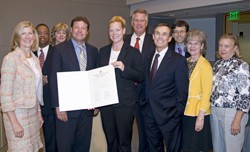 Laura Keller, Advocacy Director for the Northwest/Pacific Region of the American Diabetes Society is joined by the members of the Metropolitan King County Council after the Council declared September 6-10 ‘King County Quits!’ Week to encourage students to make good choices when it comes to smoking.