The Metropolitan King County Council today voiced its support for the local, national and international efforts to protect the environment by proclaiming April 22 Earth Day in King County. The effort started 41 years ago to raise awareness about the environment has grown into a world-wide event, celebrated in 175 countries.

“Earth Day is a reminder to put the environment front and center,” said Councilmember Larry Phillips, sponsor of the proclamation. “Restoring and protecting the earth’s natural resources should be a priority for everyone—for nature enthusiasts, for people concerned about their health and longevity, and for those who want to save money and support a strong economy. Our economy, health, and quality of life all tie back to the sustainability of the planet.”

“Earth Day is an opportunity to reflect on protecting the environment in all settings,” said Council Chair Larry Gossett. “Efforts to restore and revamp urban communities damaged through years of pollution are taking place on a local, national and international level. These programs recognize that clean environments cross all boundaries and jurisdictions.”

“Earlier today in a briefing of our Committee of the whole, we were told that 60 percent of business leaders cite ‘environmental surroundings’ as an incentive for doing business in King County,” said Council Vice Chair Jane Hague. “Smart environmental policy is not only important for creating healthy communities, it’s also key to fostering a robust local economy. Reminding ourselves of that is why Earth Day is so important.”

“Earth Day will be observed in more than 180 nations this year, making it the most-widely-celebrated secular holiday in the world,” said Denis Hayes, President and CEO of The Bullitt Foundation, which focuses on environmental sustainability. “Although our own national government has been a disappointment in recent years, cities, counties and states are moving ahead vigorously, as is much of the rest of the world.”

On April 22, 1970, more than 20 million Americans participated in the first Earth Day at college campuses and cities throughout the U.S. Many important laws were passed by Congress in the wake of the 1970 Earth Day, including the Clean Air Act, Clean Water Act, Endangered Species Act, Superfund, and the creation of the United States Environmental Protection Agency.

“We are fortunate in King County to be surrounded by such natural splendor including miles of forest, greenspace, rivers, lakes, and our expansive Puget Sound,” said Councilmember Julia Patterson. “Today’s proclamation acknowledges our duty to protect this precious landscape and the natural resources that make King County such a magnificent place to live and play.”

“In East King County, we are recognizing the goals of Earth Day this week with a celebration of the native Lake Sammamish Kokanee salmon,” said Councilmember Kathy Lambert. “With the collaboration of many government agencies and private organizations, Kokanee recovery efforts include releases of tiny Kokanee fry from the hatchery supplementation program into creeks around the lake this week. The fish will be able to thrive as a result of our healthy environment.”

“Earth Day presents us with an opportunity to examine our County’s environmental sustainability practices,” said Councilmember Bob Ferguson. “I am pleased that the Council continues to work towards making our operations greener as part of the larger goal of ensuring that King County remains a wonderful place to live for many future generations.”

“Our environmental challenges are huge. Doing nothing is not an option,” said Steve Dubiel, Executive Director of Earthcorps. “Back in 2004, EarthCorps expanded Earth Day into Earth Month because one day is simply not enough. Earth Month is all about giving people opportunities to make a difference. EarthCorps is excited to lead 3,500 volunteers on 25 hands-on projects in seven cities during Earth Month. Go to the Earthcorps website and sign up to volunteer!”

This April 22, King County will host the eighth annual Earth Day Expo at Westlake Plaza in Downtown Seattle. The event will feature a wide range of activities, speakers and vendors geared toward people of all ages. Participants can get information and tips on how to reduce their carbon footprint, “green” their commute and tips on making a green home and garden.

“I hope all residents of the county will commemorate this upcoming celebration of Earth Day with President Theodore Roosevelt’s words in mind: ‘The conservation of natural resources is the fundamental problem. Unless we solve that problem it will avail us little to solve all others,’” said Councilmember Reagan Dunn. “How prophetic his words were nearly 104 years ago and how true they are still today.”

WHEREAS, the first Earth Day was April 22, 1970, organized by longtime environmental activist Denis Hayes to increase awareness of our planet’s fragile ecosystems and educate people on responsible environmental stewardship; and

WHEREAS, today, more than one billion people throughout 192 countries participate in the most widely celebrated secular event in the world; and

WHEREAS, King County government is a leader in addressing numerous environmental issues, including climate change, water and air pollution, open-space preservation, and waste reduction and recycling; and

WHEREAS, King County is an active member of several local and national environmental efforts, including Climate Communities and ICLEI USA - Local Governments for Sustainability STAR Community Index; and

WHEREAS, throughout the month of April, numerous organizations and community groups, including King County, EarthCorps, People for Puget Sound, and the Bullitt Foundation, will be honoring Earth Day with activities, festivals, and educational and volunteer opportunities;

in King County and encourage all county residents to become responsible stewards of our environment and our planet.

DATED this eighteenth day of April, 2011. 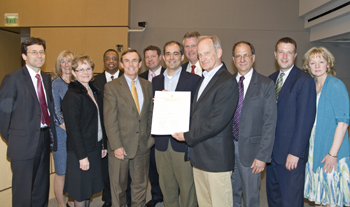 Councilmembers are joined by (l-r) Steve Dubiel of Earthcorps, Denis Hayes of the Bullitt Foundation and Tom Bancroft with People for Puget Sound at the declaration of April 22, 2011 as Earth Day in King County