The Metropolitan King County Council today recognized and thanked Renton resident Robin Abel for her years of volunteer work to promote awareness and enforcement of “secure your load” regulations on vehicles.

Abel is the mother of Maria Federici, who was severely injured seven years ago when an unsecured piece of furniture fell off a truck on the freeway and went through her windshield. Since then, Abel has become a leading advocate for roadway safety and strengthening traffic laws requiring secured loads. With her persistence, the state Legislature passed “Maria’s Law,” making it a crime to carry an unsecured load.

”I have been inspired by Maria’s courageous recovery, and by Robin’s untiring and persistent work to strengthen laws and enforcement for securing loads on vehicles,” said Councilmember Lambert. “Thanks to her vigilance, King County’s garbage transfer stations now are posted with reminder signs to all drivers to secure their loads. We all are safer on our roads and freeways because of Robin’s dedication to this cause.”

“I am honored to recognize Robin for her tireless work,” said Councilmember Bagshaw. “Norm Maleng would be proud.”

“In addition to being a hazard to drivers, unsecured loads pose a safety problem to maintenance crews and state patrol, who must remove the debris while under live traffic,” said Lorena Eng. She also noted the cost of debris removal from state highways, which amounted to $4 million in 2010.

The recognition thanks Robin Abel “for her inspiring personal dedication to improving safety on roadways in King County and across the state,” and urges all agencies, businesses, and residents to take extra precautions to “secure your load.”

“Secure your load as if everyone you love is driving in the car behind you,” Robin Abel advised.

If you see an unsecured load, please report it by calling the state toll-free hotline at 866-LITTER-1.

WHEREAS, it is the responsibility of King County government to provide for safe roadways and transportation corridors in the region; and

WHEREAS, roadway debris that falls out of or is thrown from a vehicle causes an average of 400 motor vehicle collisions every year on Washington roadways, resulting in serious injuries and fatalities; and

WHEREAS, debris from vehicles endangers other motorists when it strikes other vehicles and also when motorists swerve to avoid the debris; and

WHEREAS, the Department of Ecology operates a toll-free “Litter and It Will Hurt” hotline at 866-LITTER-1 to report those hauling unsecured loads; and

WHEREAS, the statewide emphasis and tougher new laws on securing loads is largely due to the support of late King County Prosecutor Norm Maleng and the volunteer work of King County resident Robin Abel, a leading advocate and compelling spokeswoman for roadway safety, following the severe injuries suffered by her daughter, Maria Federici; and

WHEREAS, Robin Abel co-authored a book, “Out of Nowhere,” using her personal experiences to illustrate the necessity of securing loads on vehicles to save lives on our roadways;

for her inspiring personal dedication to improving safety on roadways in King County and across the state, and we urge all agencies, businesses, and residents to take extra precautions to “secure your load” on vehicles. 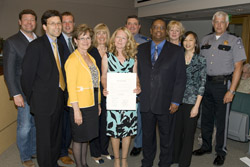 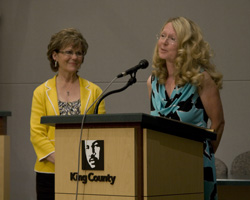