In proclaiming June 15, 2011 as Elder Abuse Awareness Day in King County, members of the Metropolitan King County Council today recognized the growing importance of safeguarding society’s vulnerable adults and the work being done on a county level to assist the survivors of abuse.

The proclamation encourages everyone to commit to building safer lives and a safe community for elderly residents. It also highlights the public and private agencies that work together to combat elder abuse, including the King County Prosecuting Attorney’s Office and the Domestic Abuse Women’s Network. The National Center on Elder Abuse found that the most common perpetrator of elder abuse is the victim's spouse, family member or guardian, making it a form of domestic violence.

“The economic recession and its impacts on the aging population should serve as a reminder of the vulnerability of our elders, and the need to look out for their well-being,” said Councilmember Larry Phillips. ”By establishing a culture of respect and protection of elders, we can help prevent elder abuse and improve our elders’ golden years.”

“As the baby boomer population ages, the number of senior citizens living in our communities continues to grow,” said Councilmember Julia Patterson. “Now more than ever, we must each take responsibility to listen to seniors and their caregivers, intervene when we suspect abuse and educate others on how to recognize and report suspicious behavior.”

“As age can bring with it physical limitations, many older people become vulnerable, and many cases of elder abuse involve family members,” said Councilmember Kathy Lambert, who has served on King County’s Domestic Violence Council. “Some older women who are victimized by partners or children feel ashamed, embarrassed, depressed and afraid to confide in friends and family. Fear of financial insecurity also prevents older women from reporting abuse. We all can help identify abuse and get help to those who need it.”

The King County Prosecuting Attorney’s Office handles about 350 cases a year involving elder neglect and abuse, and recognizes the need for focusing on the rapidly growing elderly population in King County.

Communities around the globe celebrate World Elder Abuse Awareness Day every June 15. Elder abuse consists of any act that harms a senior or jeopardizes his or her health or welfare, including neglect or financial, emotional or physical abuse, and is inflicted on vulnerable seniors across all socio-economic boundaries.

Councilmembers called for everyone in the community to help prevent elder abuse by recognizing the signs, such as physical trauma, withdrawal, depression, anxiety, and fear of family members, friends or caregivers. For more information, go to the King County Prosecuting Attorney’s web site or call (206) 296-9010.

WHEREAS, King County’s senior citizens deserve to be treated with respect and dignity to enable them to continue to serve as leaders, mentors, and volunteers who contribute to the vitality of the community; and

WHEREAS, elder abuse consists of intentional actions that cause harm or a serious risk of harm to a vulnerable elder by a legal guardian, a person in a trusted relationship, or failure by a caregiver to satisfy the elder’s basic needs; and

WHEREAS, the National Center on Elder Abuse determined that the most common perpetrator of elder abuse is the victim’s spouse or partner, defined as domestic violence; and

WHEREAS, we all are responsible for eliminating elder abuse by watching for signs such as physical trauma, withdrawal, depression, anxiety, fear of family members, friends, or caregivers; and

in King County and encourage everyone to commit to building safer lives and a safe community for our elderly residents.

DATED this thirteenth day of June, 2011. 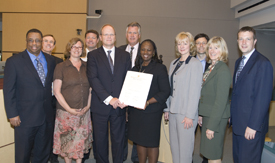