Recognizing and honoring women for their countless contributions to community, government and nation

With an nod to the theme for this year’s celebration, the Metropolitan King County Council today declared the month of March Women’s History Month in King County and encouraged county residents to participate in events and learn more about the significant role women have played throughout our history.

The theme for the 2011 celebration, “Our History is Our Strength,” recognizes the challenges women have overcome, honors their historic achievements, and encourages the celebration of women as role models for everyone.

“King County has been fortunate enough to cultivate many homegrown woman leaders,” said Council Vice Chair Jane Hague. “Women’s History Month gives us an opportunity to recognize these leaders and explore how women have played a role in shaping our society.”

“This proclamation ensures our continued recognition of women everywhere, many of whom we live and work alongside today, who have demonstrated the courage to pave new paths and create a vision of what is possible for all of us to achieve,” said Councilmember Julia Patterson.

“Since women earned the right to vote in Washington 100 years ago, this state’s voters have consistently recognized the strengths that women bring to government and elected them to public office,” said Councilmember Kathy Lambert. “I had the honor of serving in the state House of Representatives when women made up more than 40 percent of the Legislature, which was then the highest percentage in the nation. I honor women who dedicate their lives to public service and serve as an inspiration to the next generation of women leaders.”

“Our region has a proud history of women leading in government, business and community, and we are stronger and more prosperous for it,” said King County Executive Dow Constantine. “Woman have overcome many barriers, but we must never lose sight of the need to keep fighting for equality and opportunities for all people.”

WHEREAS, women of every race, ethnicity, and socioeconomic background continue to make historic contributions to the growth and strength of King County, Washington State, our nation, and the global community; and

WHEREAS, women constitute a substantial portion of the labor force, working inside and outside of the home; and

WHEREAS, these contributions have been critical to the growth and development of our economy, our cultural and artistic achievements, our social advancement, and many other areas of accomplishment; and

WHEREAS, these contributions made by women continue to benefit everyone in our society; and

WHEREAS, 2011 marks the 163rd anniversary of the historic Women's Rights Convention at Seneca Falls, N.Y., which helped ignite the woman’s suffrage movement and later efforts to obtain equal rights for all; and

WHEREAS, despite the innumerable contributions women have made and continue to make, there is much more that we can learn about the enormous impact women have had on our national history; and

WHEREAS, King County has observed March as Women’s History Month since 1998 and recognizes the many contributions women have made to the workforce, government, and community;

in King County and encourage all residents to participate in ceremonies and events to commemorate and honor women for their countless contributions to our government, community, and nation, and to learn more about the significant role women have played in our history.

DATED this fourteenth day of March, 2011. 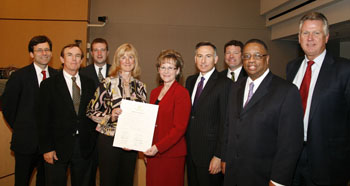