Celebrating with survivors, reminding everyone of early awareness and annual mammograms 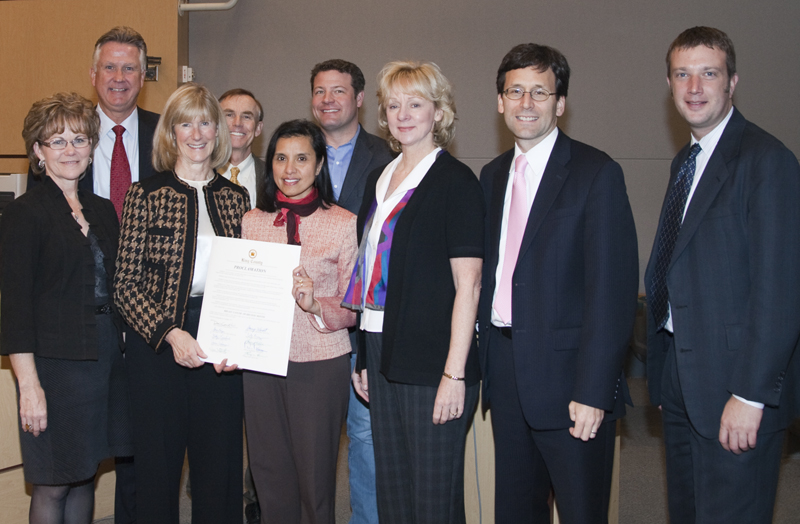 The Metropolitan King Council today declared the month of October Breast Cancer Awareness Month in recognition of those who have survived the disease and to support those women and men battling breast cancer.

“Today’s proclamation is a celebration for those who have survived their fight with breast cancer, and a reminder to everyone that beating breast cancer is a community effort,” said Council Chair Larry Gossett. “Let’s remind those we love that early detection is the first step and to take advantage of the information and resources available in our communities.”

“We all know someone in our that lives that has been affected by breast cancer,” said Council Vice Chair Jane Hague. “It’s important that we continue the fight to raise awareness, encourage early screening, and honor the survivors of this difficult disease.”

“I am proud to support today’s proclamation. Citizens and families in King County who are battling breast cancer need our support,” said Councilmember Julia Patterson. “Although survival rates have increased, screenings rates have declined. So, as a reminder that early detection is the most important step in surviving this disease, there is no better day than today to declare October ‘Breast Cancer Awareness Month.’”

“The medical screening process is easy and fast and should be part of the regular health care routine for women older than 40,” said Councilmember Kathy Lambert. “Early diagnosis and treatment has proven effective in saving lives. At the annual Walk for the Cure, I was again impressed by the energy and support of so many people who participated with such dedication for loved ones who had been diagnosed with breast cancer. This disease no longer is the death sentence or taboo topic that is was for our grandparents, and that progress is the best reason to celebrate.”

Every two minutes, a woman in this country receives a diagnosis of breast cancer, making it the most frequently diagnosed cancer among women after skin cancer. More than 39,000 women are expected to succumb to the disease in 2011, as well as 450 men. But improved treatment has increased the chance of surviving breast cancer, as can be seen in the 2.5 million breast cancer survivors in the U.S.

Early detection is still the first line of defense in fighting breast cancer, but screening rates are declining. A recent study revealed that among 1.5 million women over the age of 40 with health insurance, less than 50 percent received the recommended annual screening.

“Awareness is critical if we are to protect women and their families from the devastating impacts of breast cancer,” said Councilmember Larry Phillips. “Knowing about the prevalence of breast cancer, the screening options, and the benefits of early detection can save lives and improve outcomes.”

“Breast cancer is a disease that affects us all. It is critically important that women receive yearly mammograms for early detections,” said Councilmember Reagan Dunn. “My Mom was very important in my life. For the sake of sons and daughters who depend on their Mom, women should be aware of the risk and the resources for early detection.”

“The statistics are startling. About 1 in 8 women in the United States will get breast cancer, making it very likely we all have personal stories of someone close to us who has been affected by the disease,” said Councilmember Bob Ferguson. “Today’s recognition expresses support and acknowledgement of the courage and strength of the individuals battling breast cancer and their loved ones.”

“Breast cancer is personal. It affects everyone. My family includes survivors and current warriors. We all must be aware,” said Councilmember Joe McDermott.

A representative of the Susan G. Komen Foundation joined Councilmembers at today’s proclamation. The Puget Sound Affiliate of the Komen Foundation has invested nearly $23 million to fund local breast health education, screening and treatment support in Western Washington and for research to find the cures for breast cancer.

“Because more than 50 percent of women with insurance are not being screened and underserved women still need screening assistance, our goal is less talk and more action, and get everyone involved to help save lives and find a cure for this disease,” said Komen Puget Sound Executive Director Cheryl Shaw.

“Millions of Americans have beaten breast cancer, but early detection is the key,” said Executive Dow Constantine. “Our goal in proclaiming Breast Cancer Awareness Month is to encourage annual tests for all women over the age of 40 and to reverse the decline in screening rates for this deadly disease.”

So along with celebrating the lives of those who have beaten the disease, and keeping people informed about the resources available to those who have just been diagnosed, Breast Cancer Awareness Month is also a reminder of the importance of annual mammograms and regular self examinations.

WHEREAS, every two minutes, a woman in this country receives a diagnosis of breast cancer, making it the most frequently diagnosed cancer among women after skin cancers; and

WHEREAS, through research and advocacy, significant advances have been made in the fight against breast cancer, including an increase in five-year survival rates for localized breast cancer from 74 percent to 98 percent; and

WHEREAS, the 2.5 million breast cancer survivors in the U.S. today are a testament to courage, as well as to the importance of promoting awareness about breast cancer, providing information, funding research, following recommended screening guidelines, and offering treatment to those who are affected; and

WHEREAS, screening rates are declining, and a recent study reveals that among 1.5 million women over the age of 40 with health insurance, less than 50 percent received the recommended annual screening: and

WHEREAS, various organizations are spreading breast cancer awareness to both women and men through outreach, education, and screening programs, and have empowered women with the life-saving message of early detection and importance of having annual mammograms; and

WHEREAS, throughout the month of October, women are encouraged to make a renewed commitment to following recommended screening guidelines and to make a mammogram appointment:

DATED this seventeenth day of October, 2011.