The budget leaders of the Metropolitan King County Council said today that even with the reality of having had to trim $233 million from King County’s General Fund budget over the last four years, the Council’s proactive approach to reforming county government has prepared the Council for the 2012 King County Budget deliberations.

“We've already shrunk the size of our government, including cutting $233 million from our General Fund in the last four years. As a result, we no longer face the stark choices that many cities and the state legislature are dealing with,” said Councilmember Julia Patterson, who will direct the Council’s 2012 Budget deliberations. “But because our revenues are still affected by the economic reality, we are going to have to work smarter and continue the reforms we have been implementing in the 2012 budget process.”

• Councilmember Kathy Lambert will serve as Vice Chair of the Budget Leadership Team and direct the Public Health and Safety Panel, which will assess the Executive’s proposed budgets for law, justice and public safety agencies along with the departments of Community & Health Services and Public Health.

“I will be looking closely at programs that help keep people from returning to the judicial system and that save money for the taxpayer,” said Councilmember Lambert. “In the past decade, King County has been a national leader in implementation of therapeutic and prevention alternatives to incarceration with Drug Court and Mental Health Court programs. Our new Veterans Court pilot will continue the work of the Mental Health Court by dedicating specialized services for our veterans. They will get the help they need instead of jail time. We see the positive results of these therapeutic programs in creating improvements for people’s lives.”

• Councilmember Joe McDermott will lead the Physical Environment Panel, which will review services provided by the Departments of Natural Resources & Parks and Transportation.

“Critical transit service was preserved in our region thanks in part to strong reforms pursued by the County. This year, the Council turns its attention to maintaining county roads which face an eroded tax base and drastic cuts,” McDermott said. “One of the issues the Physical Environment Panel will examine is the proposed Roads Strategic Plan. We will be looking for further reforms in this and other areas.”

• Council Vice Chair Jane Hague will serve as Chair of the General Government Panel, which will be responsible for General Fund budgets such as Assessments and Elections, and the County’s internal service funds like Facilities Management, Human Resources and Finance

“Many people in King County are facing a tough economic reality right now,” said Hague. “As they tighten their belts, they expect county government to do the same. As Chair of the General Government Panel, I look forward to examining how we can continue to reform King County internally. I hope to expand on the success we’ve had recently in reducing costs and eliminating waste.”

The panels will begin their review of the Executive Proposed Budget on Tuesday, October 4. All members of the County Council serve on the Budget Committee during the annual review and adoption of the County budget. Traditionally, the Council adopts the County budget the Monday before Thanksgiving.

All meetings begin at 6:30 p.m. Day-after coverage of the public hearings will be available both online and on King County TV, seen on Comcast and Broadstripe Cable Channel 22. You can also sign up to follow the deliberations through the Council’s 2012 Budget web page, Facebook and Twitter. 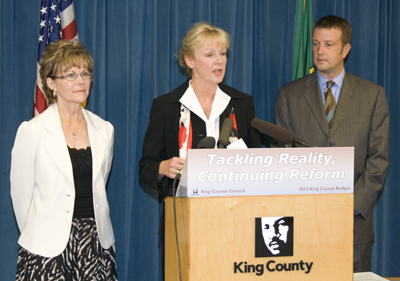