Founded in New York in 1892, the local chapter was organized 20 years later and chartered on April 8, 1912, to represent streetcar operators with the privately owned Seattle Electric Company. Today, Local 587 is the largest ATU local on the West Coast, representing public employees in three counties.

“Our bus drivers are on the front lines and serve as the face of King County,” said Councilmember Kathy Lambert, who presented the recognition. “They deliver exceptional customer service and have been integral to establishing Metro Transit as one of the best public transit systems in the country. King County employees and citizens are fortunate to benefit from this productive partnership that keeps the buses and trains rolling.”

She was particularly appreciative of ATU’s leadership in bringing the Safe Place program to Metro and Sound Transit buses last year. The national program links public and private resources with youth service organizations to get troubled youth off the street. Beginning last August, every ATU driver was trained to recognize and offer assistance to young people in need of a safe place to go.

“I want to congratulate ATU, Local 587, on 100 years of advocating and representing the thousands of transit workers in King County,” said Council Chair Larry Gossett, who co-sponsored the presentation. “This union has a fine history of improving the working conditions and fighting for a livable wage and good benefits for its members. In both good and difficult economic conditions, Local 587’s leadership and members have worked with us to meet our budget and to keep the transit system serving riders in King County.”

“ATU transit operators provide a great service to our region, getting us where we need to go conveniently, courteously, and reliably,” said Councilmember Larry Phillips, Chair of the Transportation, Economy, and Environment Committee. “They do a very difficult job, and they do it very well. Congratulations to them on 100 years.”

“The membership of Amalgamated Transit Union greatly appreciates the collaborative relationship we enjoy with our County Council and the support we receive from the citizens of Martin Luther King, Jr. County,” said ATU Local 587 President Paul Bachtel.

“Metro bus drivers know that their job is often thankless. The Amalgamated Transit Union, Local 587, workers provide an essential service for King County and have done so for 100 years. I thank them for their service,” said Councilmember Pete von Reichbauer.

“As a regular bus commuter, I appreciate the service, dedication, and hard work of the men and women who operate and maintain our transit system,” said Councilmember Bob Ferguson. “I am pleased to stand with ATU Local 587 members in celebrating this historic and remarkable milestone.”

“For 100 years the Amalgamated Transit Union, Local 587, has been an integral part of the transit system here in King County and the greater Puget Sound Region,” said Councilmember Reagan Dunn. “I would like to commend the ATU Local 587 for all their contributions to the region and thank them for their hard work and continued dedication to the citizens that use their services each and every day.” 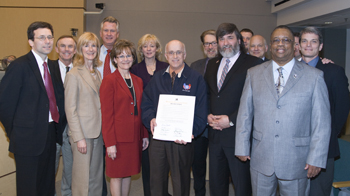 The Amalgamated Transit Union, Local 587, representing more than 4,000 bus drivers and transit operators, was recognized by the King County Council for 100 years of serving public transportation needs in King County.