“I look forward to the Fair every year,” said Dunn. “This event puts smiles on everyone’s faces and it is a whole lot of fun for all involved. I am very pleased to congratulate the winner, Prince and his “human,” Gabriella Sechrist who is an active member of the 4H Club Pups @ Play. Thank you to everyone that helped make this a great event.”

Other winners at the Critter crowning included Sarina Cassell, and member of the 4-H Club, Cloverleaf whose pet Alpine Goat Elli came in second. Cassie the horse, owned by Jaxon Hagedorn of the 4H Club, Royal Riders, was the third place critter.

“As Marketing and Events Manager for the Enumclaw Expo Center, I am so excited that the King County Fair continues to live!” said Damazio. “Universal Fairs took over the coordination of the Fair last year and continued again this year to ensure that we could celebrate our 150th Anniversary.”

The King County fair runs from through August 5 at the Enumclaw Expo Center which is located at 45224 284th Avenue SE.

Advance tickets can be purchased at your local Quality Food Center (QFC) or at the gate for $5. Children 4 and under admitted free. For more information, call (360) 615-5631 or visit the King County Fair web site 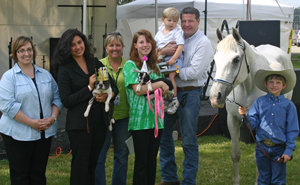