More than half-million people a year hospitalized due to DVT

“DVT awareness continues to grow in the public realm, but more needs to be done so people understand the signs and symptoms of DVT and can reduce their risk,” said Dunn. “In honor of my mother, I have worked across the country to raise awareness of this serious, yet preventable, condition.”

DVT is a blood clot that forms inside a deep vein, most often in the lower leg. Once formed, a blood clot can break off and if not treated immediately has the potential to move into the lungs and block circulation, creating a life-threatening condition – pulmonary embolism, or PE. This medical condition is frequently fatal.

Dr. Roger Stark, healthcare analyst with the Washington Policy Center and Dr. Anneliese Schleyer, Associate Medical Doctor at Harborview Medical Center and DVT expert accepted the proclamation from Dunn. The proclamation supports a national campaign to build awareness of DVT and to encourage the public to undergo screening for this health condition.

“Simple steps can ensure that people know the signs of DVT,” said Dunn. “Those signs and understanding what needs to be done can literally save lives.”

WHEREAS, deep-vein thrombosis (DVT) is the formation of a blood clot (thrombus) in a deep vein, usually in the legs or pelvic area, that partially or completely blocks circulation; and

WHEREAS, if neglected, there is a significant risk of the clot traveling to the lungs and causing a pulmonary embolism (PE); and

WHEREAS, risk factors can include a hereditary predisposition, as well as lack of mobility, even temporarily, such as one might experience on a long flight; and

WHEREAS, fatal pulmonary embolisms may be the most preventable cause of hospital deaths in the United States; and

WHEREAS, a healthy lifestyle, awareness, and preventive measures are the first steps toward dramatically reducing the number of lost lives; and

WHEREAS, the inaugural DVT Awareness Month, sponsored by the national Coalition to Prevent DVT, took place in March
of 2004, and the following year, the U.S. Senate unanimously declared March “DVT Awareness Month”;

in King County and thank the Coalition to Prevent Deep-Vein Thrombosis for establishing this month of awareness.

DATED this nineteenth day of March, 2012. 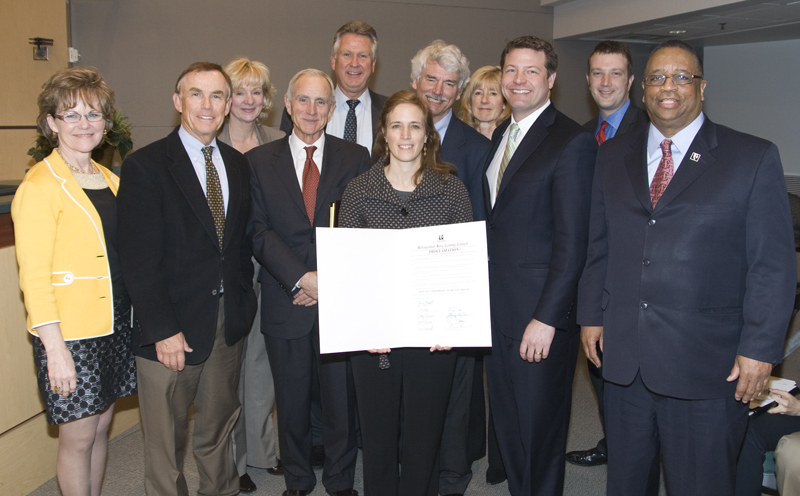