The Metropolitan King County Council today recognized King County Sheriff Sue Rahr and thanked her for her three decades of service to the people of King County as she begins her final week in the Sheriff’s Office.

“From Patrol Deputy to Division Chief to Sheriff, Sue Rahr has left her mark at every level of the Sheriff’s office,” said Council Chair Larry Gossett. “It is with sadness that we see her leave the County Courthouse, but we know her legacy is the strong, stable 21st Century department she is leaving for the next Sheriff.”

“Sheriff Rahr has led the King County Sherriff’s Department with distinction over the course of some very challenging times,” said Council Vice Chair Jane Hague. “Since her appointment in 2005, I’ve enjoyed working with her and I wish Sherriff Rahr the very best as she beings the next chapter of her professional life.”

“We take this opportunity to salute Sheriff Rahr for her decades of service to King County and her role as the first woman to lead the Sheriff’s Office,” said Councilmember Kathy Lambert, chair of the Law, Justice, Health and Human Services Committee. “Her emphasis on crime prevention, community policing and implementing technology tools has left a legacy of partnerships that will continue to serve the public well.”

On March 31, Rahr is leaving the Sheriff’s Office after 32 years. She’s leaving King County to become director of the Washington State Criminal Justice Training Commission where she will be responsible for the agency that trains all police in the state except state troopers.

“Sheriff Sue Rahr set the standard high for the men and women of the force but she especially showed the great heights women can achieve in law enforcement,” said Councilmember Pete von Reichbauer. “For 32 years, Sheriff Sue Rahr has served in law enforcement and although she will be missed in King County, I am confident she will do great things at the Washington State Criminal Justice Training Commission. I am also excited to welcome Steve Strachan to the position of King County Sheriff.”

“I thank and commend Sheriff Rahr for her unparalleled leadership in King County’s Sheriff’s Office for over three decades,” said Councilmember Julia Patterson. “Our loss is the state’s gain. The future of the state’s law enforcement agencies is in great hands with her at the helm. I wish her all the best.”

Rahr‘s intention was to pay for law school by working in law enforcement. That “interim” job became a career that spanned from being one of the first women to work as a regular patrol officer when she was assigned a single-officer patrol car in 1979. Rahr worked undercover narcotics, directed the Internal Investigations, Special Investigations and Gang Units and was Chief of the Sheriff Department’s Field Operations Division.

Appointed Sheriff in 2005, Rahr has been a champion of using 21st Century technology in law enforcement, partnering with Microsoft and other companies in the use of electronic communication in the creation of community networks to “connect” neighborhoods with law enforcement.

“Sheriff Sue Rahr has always taken a collaborative approach, and I enjoyed partnering with her to tackle some of our toughest public safety issues—from maintaining funding for the Sheriff’s office during an difficult economy to increasing services for those suffering from mental illness and chemical dependency who are caught up in our criminal justice system,” said Councilmember Bob Ferguson.

“King County has been fortunate to have Sue Rahr as its elected Sheriff,” said Councilmember Reagan Dunn. “Even through difficult budgetary times, Sheriff Rahr has provided steady, quality leadership for law enforcement officers serving and protecting the residents of unincorporated King County and cities contracting with the Sheriff’s Office. I thank her for her service and wish her well in her next endeavor.”

WHEREAS, after graduating from Washington State University, Sue Rahr began police work to earn money for law school; and

WHEREAS, Sue Rahr discovered she liked apprehending criminals more than prosecuting them, so she stayed in law enforcement, becoming one of the first women to work as a regular patrol officer when she was assigned a single-officer patrol car in 1979; and

WHEREAS, over the next two decades in the Sheriff’s Office, Sue Rahr worked as an undercover narcotics officer and commander of Internal Investigations, Special Investigations and Gang Units; and

WHEREAS, Sue Rahr was appointed Chief of the Sheriff Department’s Field Operations Division in 2000, where she developed the Sexual Assault Prevention program for elementary school children and parents, established the Party Patrol Program, and implemented training in the use of less-than-lethal weapons for county deputies; and

WHEREAS, Sue Rahr was appointed the first female King County Sheriff in 2005, and subsequently elected Sheriff by the people of King County in 2005 and 2009; and

WHEREAS, after three decades of serving the people of King County, Sheriff Sue Rahr will continue her stellar career of public service as the new director of the Washington State Criminal Justice Training Commission;

for her service to the residents of King County, and we wish Sheriff Sue Rahr and her husband Bill well as they begin a new chapter in their lives. 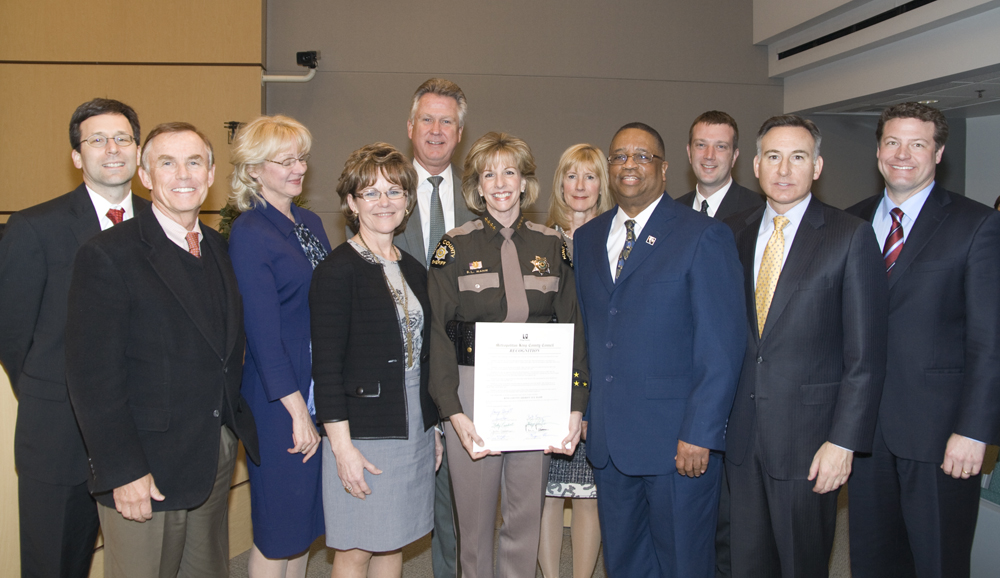 Sheriff Sue Rahr Councilmembers and County Executive Constantine after the Council recognized Rahr's three decades of service to the people of King County as she begins her last week as King County Sheriff.