The Metropolitan King County Council today presented a special recognition to Bill Block, director of the Committee to End Homelessness in King County, as he retires from the position he has held since the partnership was formed in 2005.

“This has been a partnership,” Block said. “The County Council, the Executive, other jurisdictions, the voters, providers and advocates all have come together around the goal of ending homelessness. I am honored to have been part of this effort.”

“Under Bill’s leadership, we have demonstrated that stable housing means children do better in school, improving their lifelong prospects,” said Councilmember Kathy Lambert, who serves on the Executive Board of the Committee to End Homelessness. “His stewardship of the 10-Year Plan to End Homelessness has proven that stable housing can break the cycle of jail, emergency rooms and detox centers for single adults struggling with mental illness and addiction.”

“Bill’s legacy is his persistence to break the cycle of homelessness, most notably by his role in making more housing available and creating a ‘one stop shop’ for those needing housing,” said Council Vice Chair Jane Hague.

“The greatest accolade I can give Bill is the work he has done in directing the Committee to End Homelessness has both changed and saved lives,” said Council Chair Larry Gossett. “The greatest recognition we can give him is to continue building on the foundation he has created in serving those in society who are too often ignored.”

“Bill Block has been a tireless advocate for the homeless,” said Councilmember Larry Phillips. “He championed innovative, coordinated, sand very productive approaches to ending homelessness, and never losing sight of the vision of all people having a place to call home.”

The Council thanked Block for his leadership in bringing together funding partners to facilitate construction of affordable housing, and for implementing a coordinated entry system that allows the homeless to get assistance from multiple agencies through one contact. Since being established in 2005, the Committee to end Homelessness has seen over 30,000 people exit homelessness from 2005 through 2011 and an additional 18,500 people stabilized in existing housing during that same period.

“During his time with the Committee to End Homelessness, Bill has been an instrumental figure in building regional coalitions and building housing for those in need,” Councilmember Julia Patterson said. “His leadership, during the deepest recession since the Great Depression, was invaluable and he has left a significant mark in our efforts to curb homelessness in King County.”

“As the former director of an emergency services organization, I appreciate Bill’s leadership and efforts to address homelessness,” said Councilmember Bob Ferguson. “He leaves a lasting legacy and big shoes to fill as we continue our work to get a roof over every bed in King County.”

“Homelessness is a serious issue in King County and across the nation,” said Councilmember Reagan Dunn. “We are privileged to have had such a tireless advocate working on behalf of the residents King County. Bill Block is to be commended for all his efforts.”

The Funders Group, initiated by Bill Block, was named one of the “Top 25 Innovations in American Government” by Harvard University’s prestigious Kennedy School of Government. His advocacy was instrumental in securing funding sources for housing construction and support programs such as state document recording fees, the Veterans and Human Services Levy and the Seattle Low-Income Housing Levy.
RECOGNITION

WHEREAS, Bill Block is retiring as Director of King County’s Committee to End Homelessness, the position he has held since 2005; and

WHEREAS, under his direction, the Committee shepherded a
Ten-Year Plan to End Homelessness that identifies specific strategies and brings together many partners to solve the crisis of homelessness; and

WHEREAS, during his leadership, more than 5,000 units of supported, affordable housing have been constructed, and programs that support both homelessness prevention and rapid rehousing have helped thousands more on the road to self-sufficiency; and

WHEREAS, the Seattle Times credited Bill Block with “leaving a legacy of tireless, innovative work that has improved thousands of lives;” and

WHEREAS, his efforts to coordinate funding sources with housing providers was recognized as one of the nation’s top 25 innovations in government by the Ash Center at the Harvard Kennedy School of Government;

for his remarkable leadership and lifelong commitment to improve the lives of the people of King County, by working to provide the basic human need of safe shelter for all. 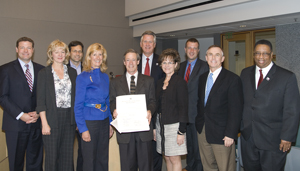 The members of the Metropolitan King County Council join Bill Block, retiring director of the Committee to end Homelessness in King County. The Council recognized the work of Block and his advocacy for the homeless in King County