“In an era of reduced revenues and increasing needs, I think the voters should know that their tax choices impact many areas of government,” said King County Councilmember Kathy Lambert. ”The bigger issue here is how the proposed Parks Levy impacts our general tax priorities. The recent recession has changed the funding formulas in a new more complicated way and there are many other pressing needs in our County. I love our parks and that is why I am proposing that we separate the proposed Levy, just as we did six years ago. We then need to give the voters of King County additional and updated information so they have greater clarity and transparency on how we fund our junior taxing districts and how that funding process impacts many junior districts such as fire, hospital and flood districts.”

The Metropolitan King County Council is considering two options for renewing the six-year Parks Levy, which expires this December. One option would increase the levy by 42percent to fund major acquisitions to the King County Parks system. It asks for a property tax lid lift of 18.77 cents per $1,000 of assessed value, which translates into a yearly rate of $56.30 for the owner of a $300,000 home in King County. The voters’ only choice under this approach would be not funding parks or accepting a 42percent tax increase.

According to the King County Assessor, the Parks Levy’s 42 percent increase would also use up most of the excess levy capacity. This means that under the state law that caps our total levies at $5.90 per $1,000 of assessed value, fire districts, hospital districts, flood districts, libraries and other junior taxing districts may not be able to receive full funding for their budgets during the life of this levy. There would also not be capacity for additional revenue to these districts in the future.

Lambert’s legislation would split the levy into two parts, giving the voters a choice: supporting maintenance and operations for the current parks, and then separately deciding if they want to additionally fund major acquisitions along with supporting existing parks.

“Voters do not have unlimited funds and need to have more choices in prioritizing their hard-earned resources. There are many issues we are facing including dealing with our backlog of road repairs, a shortfall in transit funding or the need to fully fund our Sheriff’s Office instead of giving precedence to parks,” said Lambert.

Lambert added, “I support our King County Parks and believe they should be appropriately funded. I believe it’s unreasonable to ask the voters to support an expensive solution without also providing an option to maintain our existing parks in a more status quo manner. But we need to provide the voters transparency in the options they have, as well as knowledge of the ramifications of spending up to the tax capacity that could negatively impact fire and other districts. I believe that when they have this information they will make a wise and informed decision that will maximize our tax dollars.”


The state order of taxing districts 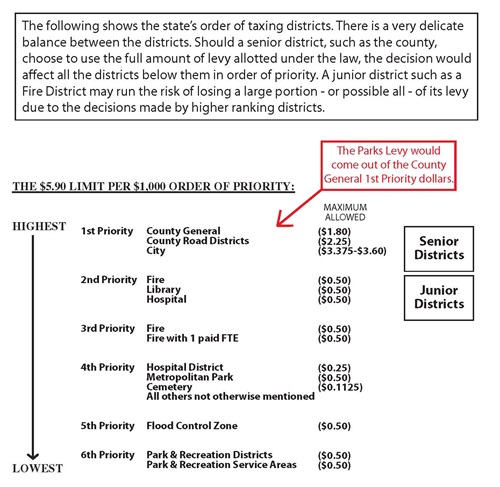