On July 27, 1953, the armistice ending the Korean War was signed. Today the Metropolitan King Council recognized those who fought in the conflict as the U.S. and the Republic of Korea mark the 60th anniversary of the armistice.

Labeled as the “Forgotten War,” the impact and history of the Korean War resonates throughout King County and the rest of Washington State. A Korean War memorial was constructed over 20 years ago in Olympia. There are an estimated 55,000 Korean War Veterans statewide, with approximately 10,000 living in King County.

For Councilmember Rod Dembowski, one of the Korean War Veterans is his father, Al Dembowski.  “It’s a privilege to be able to honor those who served and to celebrate the contributions of the Korean American Community to King County,” said Councilmember Dembowski. “The enduring friendship between the United States and The Republic of Korea has paid immeasurable dividends to both countries. We owe our Veterans the highest gratitude for their contributions to peace and prosperity.”

“The legacy of joint service forged between the American veterans of the Korean War and the Korean people has fostered a special relationship between the Republic of Korea and the United States of America, which unites us not only through our common values, but economically and militarily as well,” said Councilmember Pete von Reichbauer. “As a Councilmember who represents a large Korean-American population, I am especially pleased to recognize the 60th anniversary of the Korean Armistice, and the incredible sacrifices made by our veterans.”

“Today, on behalf of the Korean people and government, I have the honor to present Ambassador of Peace medals to Korean War Veterans,” said Song “They went to rescue South Korea during the Korean War and fought heroically against North Korean aggressors. These heroes are living testimony to our 60 years of alliance. Thanks to their great dedication and sacrifice, South Korea could achieve what it is and avoid what it is not. With this medal, I respectfully convey sincere gratitude of my country to them and their families. I sincerely hope that our heroes stay strong and healthy in order to witness a reunified Korea, a dream to be realized in the near future.”

"All of the Korean War veterans that we have honored today at the King County Council deserve our sincere gratitude for their sacrifices and service to protecting democracy in that region of the world," said Council Chair Larry Gossett. “The veterans’ presence and stories here is a reminder that peace does not come easily. As we continue to strive for peace on the Korean peninsula, we honor these men for their valiant contributions.”

“Some may think the Korean War has been forgotten, but it is anything but that for our country and the brave men and women who fought in it, many of whom reside in King County,” said Councilmember Julia Patterson, Vice-Chair of the Council. “The 60th anniversary of the armistice is a reminder of the importance of peace and the great sacrifices that members of our armed forces make.”

“Anniversary’s like the one we are honoring today must never be forgotten,” said Councilmember Reagan Dunn.  “In King County we have a large number of Korean War Veterans and they and their families deserve our reverence and respect for all their sacrifices for this country.”

“We all owe our gratitude to those brave men and women who served during the Korean War,” said Councilmember Kathy Lambert. “The 60th Anniversary celebration is a remembrance of the price of freedom and the sacrifice of individuals and families.”

“Veterans of the Korean War deserve our respect and remembrance for their service,” said Councilmember Larry Phillips. “We also celebrate the sixty years of peace that the Korean War armistice has brought.” 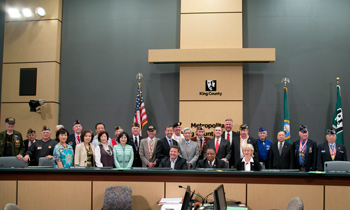 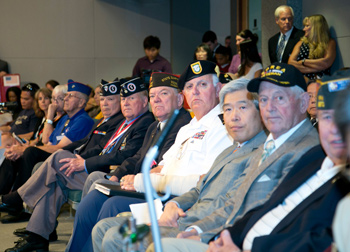 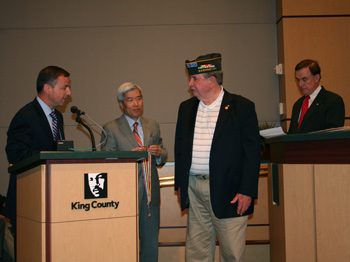 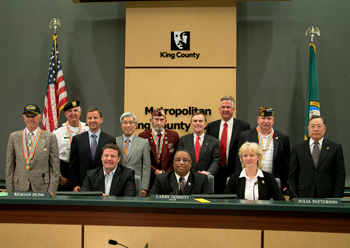