Metropolitan King County Councilmembers Jane Hague and Kathy Lambert have been strong advocates for assisting the survivors of domestic violence throughout King County. That work was recognized at the annual World of Hope Dinner and Auction hosted by the domestic violence service agency LifeWire (formerly Eastside Domestic Violence Program), who presented the members with their Norm Maleng Award.

The award was given to the members by Judy Maleng, the wife of the late County Prosecutor, at the May 18 dinner. The award honored their leadership and dedicated service—personally and professionally—to ending domestic violence.

Barbara Langdon, LifeWire Executive Director, said that “Councilmembers Jane Hague and Kathy Lambert have made it their mission to STAND UP and SPEAK OUT to ensure the safety of domestic violence victims, children and families in our community. It’s a well-deserved honor for two phenomenal women.”

“LifeWire does amazing work and I am so honored that Jane Hague and I were given their Norm Maleng award,” said Lambert. “Norm was a wonderful friend and we shared a passion for ending domestic violence in King County. I believe it can be done and LifeWire is a leader in this effort with their advocacy, education and services provided.” 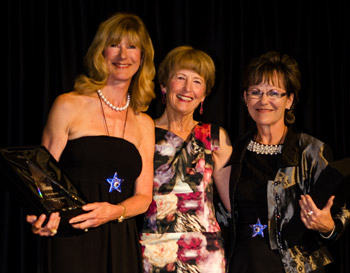 Councilmembers Jane Hague (l) and Kathy Lambert (r) are joined by Judy Maleng after receiving the Norm Maleng award from LifeWire at the agency’s World of Hope Dinner and Auction.