The impact of Norm Dicks was felt throughout Washington State, and in recognition of the work he did for the people of Washington. the Metropolitan King County Council today honored the former Congressman by declaring May 20 “Norm Dicks Day” in King County.

“Congressman Dicks and my mother served closely together for many years in Washington, D.C.,” said Councilmember Reagan Dunn, a cosponsor of the recognition. “Like Senators Magnuson and Jackson before him he is a true statesman in every sense of the word. It is a privilege to be able to honor him today and present him with this recognition for all he has done for this region and for this country.”

“Congressman Norm Dicks delivered over and over for the people of this region, and we enjoy significantly greater economic opportunities and quality of life because of his work,” said Councilmember Larry Phillips, a cosponsor of the recognition. “Dicks has been integral in bringing light rail to our region, funding salmon recovery and restoration of Puget Sound, and protecting military jobs, among his many outstanding achievements on behalf of the public.”

“Congressman Dicks’ service to the people of the state of Washington is a reminder that boundaries and jurisdictions should never be a barrier,” said Council Chair Larry Gossett. “The residents of his Congressional District may have sent him to Washington, D.C., but Norm felt a responsibility for assisting all the people in our state.”

Dicks was a standout two-way football player at the University of Washington, where he earned his law degree. After working for U.S. Senator Warren Magnuson, Dicks was elected to Congress in Washington state’s 6th Congressional District in 1976 and served 18 terms in the U.S. House of Representatives.

“Norm Dicks is an icon. His legacy joins those of Jackson and Magnuson,” said Council Vice Chair Jane Hague.

“Congressman Dicks consistently stood up for Washington State and has been a voice on behalf of the Pacific Northwest,” said Council Vice Chair Julia Patterson. “His remarkable career is an example of great leadership and our region is a better place because of his public service.”

“Congressman Dicks is a friend of King County and was always there when we asked for help,” said Councilmember Kathy Lambert. “He knew how to get things done and his dynamic personality will be missed. His voice was powerful in Congress and he was always responsive and helpful with our needs.”

Dicks was also a strong advocate for the environment, from working on the Marine Mammal Protection Act that banned oil supertankers from Puget Sound as part of Sen. Magnuson’s staff to co-sponsoring the original Superfund legislation in the 1980’s.

“Not one of King County's two million people could vote for Norm Dicks, but he was always ready to go to battle for us,” said King County Executive Dow Constantine. “He successfully fought for funds to replace the South Park Bridge and repair the Howard Hansen Dam, to aid the local fight against global climate change, and to restore King County's salmon-bearing rivers. With his great knowledge of Congress and his can-do spirit, ‘Stormin' Norman’ was the best Congressman King County never had.”

Congressman Dicks was a supporter region’s aerospace industry and a strong advocate for high-capacity transit as a catalyst for economic development and revitalization in our region. He led the effort to increase federal funding for Sound Transit and public transit in general.

“I’ve worked with Congressman Norm Dicks for many years. His dedication to our active duty and retired military personnel has always impressed me. Whether as a staff member for Sen. Magnuson or as a Member of Congress, Veterans in Washington State knew they had a friend in Norm Dicks,” said Councilmember Pete von Reichbauer. “I am pleased to join in honoring him today. His tireless work on behalf of Washington State and our country will not soon be forgotten.”

“Congressman Dicks did more than represent his district. He was a fierce advocate for our entire region — and state. While we’ll miss him backing us in Congress, Norm will continue to be a champion for the public,” said Councilmember Joe McDermott.

“Senator Warren Magnuson’s ‘Bumblesbees’ continue to have an incredibly positive impact on our state. Norm Dicks is chief among them. I commend and thank him for a lifetime of service to our nation,” said Councilmember Rod Dembowski.

WHEREAS, as a lifelong Washingtonian, Congressman Norm Dicks faithfully served the constituents of the 6th Congressional District for 36 years; and

WHEREAS, from his days as a star Husky linebacker on the field at the University of Washington to his days inside the halls of Congress, Congressman Dicks served the people of Washington State with passion, integrity, and honor; and

WHEREAS, from his first day in Congress, Congressman Dicks, known for his energetic legislative style, served on the coveted House Appropriations Committee, delivering results for his district constituents and for the people of Washington State; and

WHEREAS, in 2009, Congressman Dicks helped secure $50 million in federal funds for the clean-up of the Puget Sound, ensuring future generations of Washingtonians would be able to enjoy the benefits of a clean environment and pristine Puget Sound region; and

WHEREAS, Congressman Dicks continually advocated for high-capacity transit as a catalyst for economic development and revitalization in our region, and led efforts to increase funding for Sound Transit and public transit in general; and

WHEREAS, in 2008, the U.S. Navy Memorial Foundation awarded Congressman Dicks with its Naval Heritage Award for his steadfast and unflinching support of the U.S. Navy and U.S. Military; and

WHEREAS, in 2004, the city of Bremerton held a ribbon cutting ceremony for the dedication of the City Hall, named the Norm Dicks Government Center;

NOW, THEREFORE, we, the Metropolitan King County Council, hereby proclaim May 20, 2013, as

in King County and thank Congressman Dicks for his many years of service and for all his work on behalf of the citizens of the 6th District and all the people of Washington State. 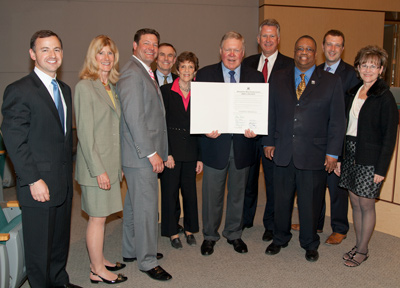