The Metropolitan King County Council’s Government Accountability and Oversight (GAO) Committee today met for a special meeting in the heart of County Council District 9 at the Newcastle City Hall.

Councilmember Reagan Dunn, who represents Newcastle on the County Council, is a member of the GAO Committee and he welcomed his GAO colleagues—Committee Chair Pete von Reichbauer and members Rob Dembowski and Dave Upthegrove—to his district.

“As a regional government it’s important that the County Council meets in the communities they represent so residents have an opportunity to meet and discuss the issues they have in person without having to drive into Seattle,” said Dunn. “I want to thank Committee Chair von Reichbauer for bringing the meeting to the city and to Newcastle Mayor Buri for welcoming us to the city.”

Dunn was joined by Newcastle Mayor Steve Buri in giving the committee a brief history of the city of Newcastle, which was incorporated in 1994.

The meeting included an update on the technology being used by King County Elections as it begins its preparations for the 2016 Presidential election. The Committee also received a follow up report on the 2012 performance audit of the King County Sheriff’s Office and Office of Law Enforcement Oversight regarding officer complaint investigation reporting. 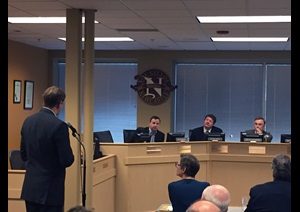