“During his time of public service, Don was a dedicated public servant who worked tirelessly on behalf of the residents of Bellevue,” said Councilmember Reagan Dunn. “I am proud to have worked alongside Dr. Davidson for a number of years, and I look forward to his continued advocacy on issues he is most passionate about.”

“Don Davidson has performed outstanding public service in the areas of water quality and salmon recovery,” said Council Chair Larry Phillips. “It has been an honor to serve with Dr. Davidson on Water Resource Inventory Area 8 Salmon Recovery Council and the Regional Water Quality Committee, where he has been a steward of effective and efficient use of public resources in environmental protection efforts.”

“Don Davidson has been a friend and colleague for many years and I’ve enjoyed working with him,” said Councilmember Kathy Lambert. “His expertise on Eastside issues has proven invaluable many times. I wish him the best.”

Davidson has the distinction of serving the citizens of Bellevue on the Bellevue City Council for 27 years, longer than any sitting Councilmember now or in the past. That includes two terms as Mayor and one as Mayor Pro Tem. He also served on numerous boards and commissions.

Regionally he served as President of the Association of Washington Cities, was a member of the Governor’s Intergovernmental Relations Commission, as well as being active in the Suburban Cities Association.

His community involvement includes organizations such as the Bellevue Chamber of Commerce (where he served as president), Overlake Hospital board, Cascade Water Alliance, the King County Visitors and Convention Bureau and the Seattle-King County Economic Development Council.

His quiet and calm demeanor was balanced with outspoken and relentless support of a clean environment, programs for salmon enhancement and citizen involvement.

WHEREAS, Councilmember Don Davidson has the distinction of serving the citizens of Bellevue on the Bellevue City Council for 27 years, longer than any sitting Councilmember now or in the past, and

WHEREAS, while known as a quiet and collaborative leader focused on a strong fiscal foundation for the city he loved, Don Davidson was also outspoken and relentless in support of the environment and salmon enhancement efforts, and

WHEREAS, concurrent to his years on the Bellevue City Council Don Davidson was beloved by many as their “Dr. Duck,” through his dentistry practice – which he credits with endowing the consensus building and calming skills he utilized during tense City Council sessions, and

WHEREAS, Dr. Davidson frequently carried discussions of his public policy challenges to his dentistry practice, where he has jokingly stated that they were more effective than Novocain for his patients, and

WHEREAS, Dr. Davidson was twice elected Mayor of Bellevue, while serving on numerous boards and commissions as well as regional committees, and

WHEREAS,  the Bellevue Chamber of Commerce, Overlake Hospital, Cascade Water Alliance, the King County Visitors and Convention Bureau, the Seattle-King County Economic Development Council and the Sound Cities Association have all benefited over the years from Dr. Davidson’s leadership, and

WHEREAS, Councilmember Davidson’s dedication, sacrifice and hard work on behalf of the City of Bellevue and its citizens, all aided and abetted by the strength and support of his lovely wife, Sue, will serve as an example for all elected officials

For his many years of exemplary service to the people of Bellevue, King County and the region. 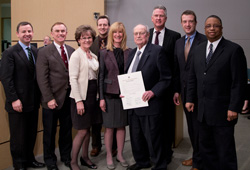