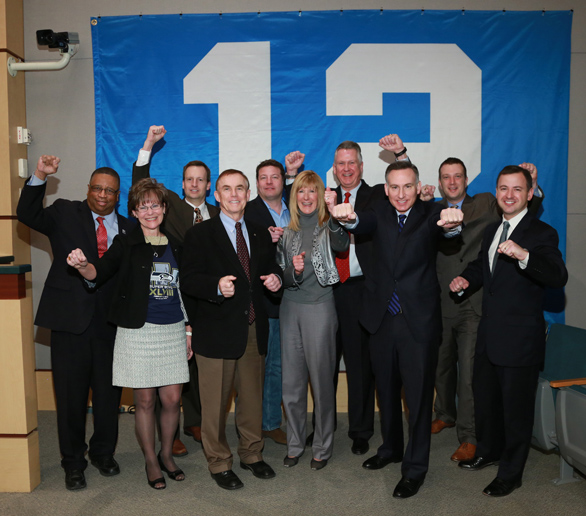 The Metropolitan King County Council and King County Executive Dow Constantine today joined Seattle Seahawk fans throughout the Northwest—and throughout the United States—in showing their support for the Hawks as they prepare for Super Bowl XLVIII in New Jersey.

In front of the 12th Man Flag that has been raised to show King County’s support for the Seahawks, the Councilmembers and the Executive sent a message to Denver Broncos fans: KING COUNTY IS BEHIND THE SEAHAWKS!!

“We join King County residents in showing pride for our Seattle Seahawks as they play in the Super Bowl and shine a national spotlight on our great region,” said Council Chair Larry Phillips. “This is a great time to show the country the spirit of tenacity and pursuit of excellence that are characteristic of our region.”

“Thanks to the 12th Man, we already have the best fan base in the NFL,” said Executive Constantine. “Now we’ve got the chance to show a worldwide audience, once and for all, that our Hawks are the best team in football.”

“After a magical season that showcased the incredible efforts of the players, coaches and the 12th Man, I say ‘Go Seahawks!’” said Council Vice Chair Jane Hague.

“I'm proud to have the Seahawks play their home games in my district,” said Council Vice Chair Joe McDermott. “I join with 12th Men (and women) everywhere sending our best wishes with the team to the Super Bowl!”

“12 is more than a number. It means reaching out and bringing others into the process. It’s not just the players of the field; it’s the people in the community who come together to bring about the success,” said Councilmember Pete von Reichbauer.

“There is excitement throughout the region on the accomplishments of the Seahawks,” said Councilmember Larry Gossett. “I look forward to joining the 12th Man in a ‘Beast Quake’ that will be sent from Seattle—pass through Denver—and be felt in New Jersey!”

“The Seahawks have created a tsunami of 12th Man community spirit and unity that we hope will propel them to victory on Sunday,” said Councilmember Kathy Lambert. “They have encouraged pride, added joy and are an economic engine to our area. Go Hawks!”

“It is an exciting time to be a Seahawks fan,” said Councilmember Reagan Dunn. “I join my colleagues and the rest of the Pacific Northwest in wishing them success at the Super Bowl. Go Hawks!”

“From kids on school playgrounds—including my boys in their Seahawks gear—to the 12th man flags atop buildings, it is impossible to miss the passion of the 12th man across our region,” said Councilmember Rod Dembowski. “I am proud that King County can lend its voice in support of this remarkable group of players as they take the national stage this Sunday. Go Hawks!”

“Always proud to represent fellow King County 12s as the loudest and best fans in all of sports,” Councilmember Dave Upthegrove said. “As for the Super Bowl, as we used to say back in the AFC West days, ‘Bust those Broncos!’”