The Metropolitan King County Council today declared January Slavery and Human Trafficking month in recognition of the ongoing effort to call attention to these forms of modern day bondage.

“In King County we have taken a proactive approach to fighting back against these monstrous crimes,” said Councilmember Reagan Dunn, co-sponsor of the proclamation. “A year ago we launched a comprehensive public awareness campaign using both County resources and private sector partnerships to show victims there is help available and where they can receive it. We must continue to stay vigilant in our fight to end human trafficking.”

“We must not only make today a day of awareness but also a year of action,” said Council Vice Chair Jane Hague. “I ask citizens to join us in identifying victims and to help end this travesty by assuring its victims that we are here to help.”

“I’m proud of King County’s continued leadership in combating human trafficking. The unique partnerships that we’ve created are making a difference,” said Councilmember Kathy Lambert. “There is still so much to be done to stop trafficking but I believe that the combination of successful prosecution and information to vulnerable populations will continue to prove effective.”

The campaign included signs and ads spreading the anti-human trafficking message on 200 King County Metro buses as well as Clear Channel billboards in and around King County. A radio ad and public service announcements were also included in the campaign.

“Human trafficking is an egregious form of modern slavery, and by raising awareness we can help vulnerable people from falling prey to exploitation,” said Council Chair Larry Phillips. “The effort is aimed at giving people information that will help them identify and avoid potential dangers.”

“There is no greater tragedy than people forced into bondage—and the realization that there are men, women and children in our community who may be enduring this slavery,” said Councilmember Larry Gossett. “This proclamation is a reminder that we can play a role in ending this tragedy.”

Law enforcement agencies and prosecutors in King County also work closely alongside the Washington Anti-Trafficking Network (WARN) who since 2004 have brought together a coalition of non-governmental organizations that provide direct services to survivors of slavery and human trafficking in Washington state and assist them on their path to restoration and recovery.

“The scourge of human trafficking, whether in the form of commercial sexual exploitation of minors or the economic exploitation of the financially vulnerable, is all too often committed through threats, coercion and violence,” noted King County Prosecutor Dan Satterberg. “As we pursue those responsible for the forced exploitation of our children and vulnerable adults, we must continue to shine the light of public awareness on the fact that we stop the trafficking by giving the victims of it a safe forum to speak up and tell their stories.”

“As providers serving victims of human trafficking in Washington State, WARN is encouraged by King County’s commitment to increasing awareness and hopes it will help those affected by human trafficking to access services so they can escape exploitation and build a better future for themselves,” said Kathleen Morris, WARN’s Program Manager.

A 2013 report from the U.S. State Department identifies nearly 47,000 men, women and children trafficked and forced into different forms of slavery, such as forced labor, sexual exploitation, debt bondage, and forced marriages, each year worldwide. Shining a bright light on these crimes and educating the public is one way we can work to eradicate these types of crimes.

“I was proud to join with my colleagues today to declare January National Slavery and Human Trafficking month,” said Councilmember Rod Dembowski. “Thousands of people are trafficked in the United States each year, and making the public aware of this very real problem is critical to ending it. I was pleased to lead the effort to fund a dedicated staff position to support King County’s Commercially Sexually Exploited Children (“CSEC”) Task Force in the 2014 Budget. I thank all of those involved for their dedication, and for the resources they have devoted to help end slavery and human trafficking.”

“We must continue to raise awareness and work together towards eradicating this horrific crime to give victims hope of a better life,” said Councilmember Dave Upthegrove. “I am proud that the South King County community is proactive in the effort to eliminate human trafficking through local law enforcement and groups such as The Genesis Project.”

WHEREAS, in the month of January, we call attention to, and shine a bright light on, the crime of slavery and human trafficking—abuse that amounts to modern-day bondage; and

WHEREAS, forms of slavery and human trafficking include forced labor, sexual exploitation, debt bondage, and forced marriages by use of fraud or coercion; and

WHEREAS, through these acts, millions of men, women, and children around the world are bought, sold, and compelled into service against their will; and

WHEREAS, in 2003, Washington State became the first state in the United States to criminalize human trafficking and has since adopted some of the most comprehensive laws in the country against these heinous crimes; and

WHEREAS, in January 2013, King County launched a public awareness campaign to highlight the fight against human trafficking, using advertisements on Metro buses, billboards, radio, and TV to inform victims and the public that help is available; and

WHEREAS, both law enforcement officers and prosecutors in King County participate in the Washington Anti-Trafficking Response Network (WARN), aimed at bringing together resources and agencies to rescue victims; and

WHEREAS, combatting the crime of human trafficking must include increased public awareness and outreach;

in King County, to highlight and emphasize this important issue.

DATED this thirteenth day of January, 2014. 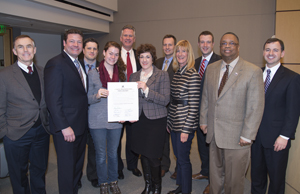