The Metropolitan King County Council today recognized the importance of increasing awareness about a specific form of impaired driving by declaring the week of Nov. 2-9 as “Drowsy Driving Awareness Week” in King County.

“It’s astounding to read about how many people drive drowsy and may not even be fully aware of how vulnerable they are to hurting themselves and others,” said Councilmember Kathy Lambert, the sponsor of the recognition. “It’s so vital as we approach the busy holiday season to remind people of that this is a serious issue and lives are at stake!”

Recent statistics state that drowsy drivers cause 1550 deaths, 71,000 injuries, and more than 100,000 accidents each year in the U.S. This includes 16 deaths and 60 serious injuries in Washington State as recently as 2010.

Lambert was joined in this recognition by King County Sheriff John Urquhart and Bill Shaw, publisher of the Reporter Newspapers chain. Shaw’s daughter Mora was severely injured in an accident caused by a drowsy driver in 2006. She survived but went through many years of treatment. Since this accident, Shaw and his wife Mary Beth have worked on making the public more aware of this major impediment to safe driving.

“I’m very appreciative of the Shaw’s continued focus on this important public safety issue,” said Lambert. “Their commitment to educating drivers on this issue is invaluable. We all need to be more aware and careful.”

Some important points to remember about drowsy driving are:

• Anyone can fall asleep while driving – more than one third of drivers report falling asleep behind the wheel.

• There are some common sense things one can do to make driving safer:

o For maximum alertness, get enough sleep before your trip. Take a mid-afternoon break, and avoid driving between 2 a.m. and 6 a.m.
o Take a passenger to keep you talking, watch for signs of sleepiness, and share the driving.

• Schedule a break every two hours or 100 miles to take a quick nap or get some exercise.


• Consume a caffeinated drink or food to boost your short-term alertness.

WHEREAS, King County recognizes the importance of safety when driving; and

WHEREAS, the AAA has found that one out of every four drivers admits to having a hard time keeping their eyes open when driving; and

WHEREAS, driving while fatigued is dangerous because it slows reaction time, impairs vision, and causes lapses in judgment, similar to drunk driving; and

WHEREAS, whereas a very fatigued driver may be asleep for several seconds without even realizing it; and

WHEREAS, Governor Jay Inslee has proclaimed November 2-9, 2014, as Washington State Drowsy Driving Prevention Week to raise awareness of safety while driving; and

WHEREAS, the National Sleep Foundation has declared November 2-9, 2014, as Drowsy Driving Prevention Week; and

WHEREAS, these efforts, along with similar proclamations across the country, will encourage drivers to consider making safe choices when driving;

in King County and urge all residents to join in the national effort to encourage driving safely, to prevent deaths, injuries, and accidents. 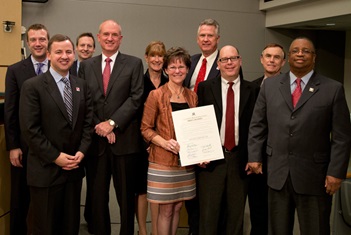 Councilmembers are joined by King County Sheriff Urquhart and Bill Shaw after declaring Nov. 2-9 as
“Drowsy Driving Awareness Week” in King County. Shaw’s daughter was hit and almost killed by a drowsy driver.