William Hayes, who began his career three-decade career with the County as a Corrections Officer was unanimously confirmed today by the County Council as the new director of the County’s Department of Adult and Juvenile Detention (DAJD). Hayes will direct an agency that is in control of two adult detention facilities and a system that is responsible for over 30,000 bookings a year and houses an average of 1,900 pre- and post-adjudicated misdemeanants and felons every day.

“Willy Hayes is a director from the ranks,” said Council Vice Chair Jane Hague. “As a Commander of the Maleng Regional Justice Center, this 30-year veteran has had first-hand experience with all the critical aspects of this position.”

“We must provide safe, secure operations 24 hours a day, 7 days a week in the King County jail.” said Larry Phillips, Chair of the King County Council. “I look forward to William Hayes’ success in running the King County Department of Adult and Juvenile Detention to ensure that the jail provides calm, steady detention without disruption and with respect for the law.”

Hayes celebrated 30 years with the County this month, beginning as an on-call Corrections Officer. While Kent Division Commander, Hayes developed the emergency policies and plans for the county’s response to possible Green River flooding from the Howard Hanson Dam.


“Director Hayes is innovative, caring and compassionate. His work on communications for inmates and their families has helped reunite people in healthy ways,” said Councilmember Kathy Lambert. “He is well respected by county staff and I know he’ll do a great job in this new expanded role.”

“Mr. Hayes has served at every level of the Department of Adult and Juvenile Detention with distinction,” said Councilmember Reagan Dunn. “His appointment as the Director of DAJD is well earned—and well deserved.”

Hayes has also been the department’s Public Information Officer for nearly 12 years and is the department’s Customer Service Officer. He was subsequently appointed Commander of the Maleng Regional Justice Center in Kent before becoming Interim Director in February of this year.

County Executive Dow Constantine said that Hayes has played a key role in establishing and training staff to the “Direct Supervision” style of managing the inmate population at the Kent Division, creating a stable and safe environment for both staff and the inmate population.

“I look forward to building on the progress we’ve made thanks to Executive Constantine’s leadership,” said Hayes. “I appreciate the trust he and Council have put in me to make King County the national model for effective adult and juvenile detention.”

Hayes becomes the head of a department that’s responsible for the operation of the Maleng Regional Justice Center in Kent and the King County Correctional Facility (KCCF) in Seattle. The DAJD also supports the Community Corrections Division which operates the county’s alternatives to secure detention services.

With more than 880 employees and a biennial budget of $271 million, the DAJD is one of the county’s largest departments. 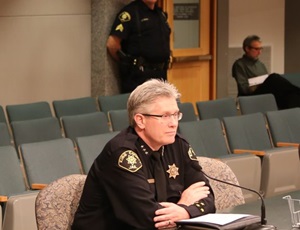