Duvall residents and longtime uber volunteers Ray and Tove Burhen were recognized last week at the Sno Valley Senior Center Annual Meeting for their extraordinary volunteerism in the Valley.

Metropolitan King County Councilmember Kathy Lambert has known, respected and admired the Burhens for two decades. Lambert, who represents the Valley on the County Council, sent a recognition honoring the couple that was read at the meeting.

Lambert’s recognition mentioned the Burhens historic preservation efforts, their activism on behalf of residents of Duvall and the fact that they are the heart and soul of the city.

Recognitions were also presented from the Cities of Duvall and Carnation.

The Senior Center also presented Councilmember Lambert with their “2014 Senior Advocate of the Year” award. 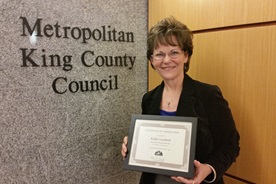 Councilmember Lambert with the “2014 Senior Advocate of the Year”
she received from the Sno Valley Senior Center.”