Six members of the Metropolitan King County Council added their voices to citizens throughout the region calling for the release of Renton resident Nestora Salgado, a U.S. citizen who has been imprisoned in Mexico for close to two years without due process of law.

Six members of the Metropolitan King County Council added their voices to citizens throughout the region calling for the release of Renton resident Nestora Salgado, a U.S. citizen who has been imprisoned in Mexico for close to two years without due process of law.

Since August 2013, Salgado has been detained in a Mexican prison without trial. She was arrested on charges related to her leadership position in an indigenous community police force in her hometown of Olinala, Guerrero.

“Health, safety, and recognition before the law are all values we hold in the highest regard,” said Council Chair Larry Phillips. “It is my hope that the U.S. Department of State will take immediate action on behalf of Ms. Salgado to ensure she receives them not only as a matter of human dignity, but also as a matter of right.”

“It is my sincere wish that Ms. Salgado receive necessary medical care immediately, and that she is quickly reunited with her family in Washington state,” said Council Vice Chair Joe McDermott. “I am troubled to know that she is being held without trial, and I urge Secretary Kerry to do everything possible to ensure a speedy resolution to this matter.

Members of Salgado’s family and other advocates for Salgado’s release addressed the Council at the April 27 Council meeting. They stressed that Salgado has been denied access to attorneys and adequate medical care to address the neuropathy in her hands and feet.

“Nestora Salgado must be released immediately.  As her daughter testified, Ms. Salgado needs immediate medical attention and is in danger of death if she does not receive it,” said Councilmember Larry Gossett. “Ms. Salgado’s false imprisonment is one of the numerous human rights violations occurring in Mexico as a result of both the US and Mexican government turning a blind eye to what is occurring in the country. We must do everything to change this policy—beginning with the return of Nestora Salgado to her family in the US.”

“This matter is urgent. I hope the United States State Department will increase its efforts and take affirmative action to free Nestora Salgado from imprisonment in Mexico,” said Councilmember Dave Upthegrove.  “Ms. Salgado needs to be back home with her family in Renton.”

The Councilmembers have signed a letter to U.S. Secretary of State John Kerry (PDF) asking for the U.S. State Department to continue its efforts to have Salgado released.

The lnter-American Commission on Human Rights states that Ms. Salgado's case meets the requirements of seriousness, urgency and irreparable harm because her rights to life and personal integrity are at risk due to the conditions of her confinement. The Commission has been joined by the lnternational Human Rights Clinic at Seattle University School of Law, which has represented Ms. Salgado in international legal proceedings. They have also confirmed that she has suffered grave violations of her physical integrity, personal liberty, and due process. 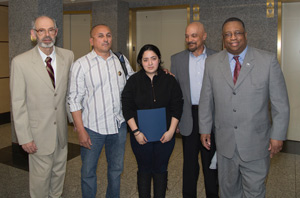 Members of Nestora Salgado’s family and other advocates addressed the Council at the April 27 Council meeting.