Filipino history in North America predates the arrival of the first colonists from Great Britain and continues throughout the U.S. The Metropolitan King County Council today recognized that rich tradition and heritage by declaring this October, “and every October thereafter,” Filipino American History Month in King County.

“It is an honor to be the sponsor of this proclamation, since the district I represent has been the historic home of the Filipino community in Dr. Martin Luther King, Jr. County,” said Councilmember Larry Gossett, the sponsor of the recognition. “Most people do not realize that Filipinos have been in the US longer over 400 years or the contributions that Filipino Americans have made through their labor, public service and heroic war time sacrifices while serving their country.”

The first documented proof of Filipino presence in what would become the United States was in 1587 in what is now California, almost a half-century prior to when the colonists arrived in the “new world.”

Over the last five centuries, Filipinos have become a vital part of the American history, especially on the West Coast and in the Pacific Northwest. In Washington, Filipinos have worked in a number of industries, but were prominent in the state’s maritime, agricultural and fishing industries.

Filipino organizers played a vital role in the desegregation of the unions that represented those who worked in the fishing industry including the Alaska Cannery Workers Union, International Longshore and Warehouse Union. 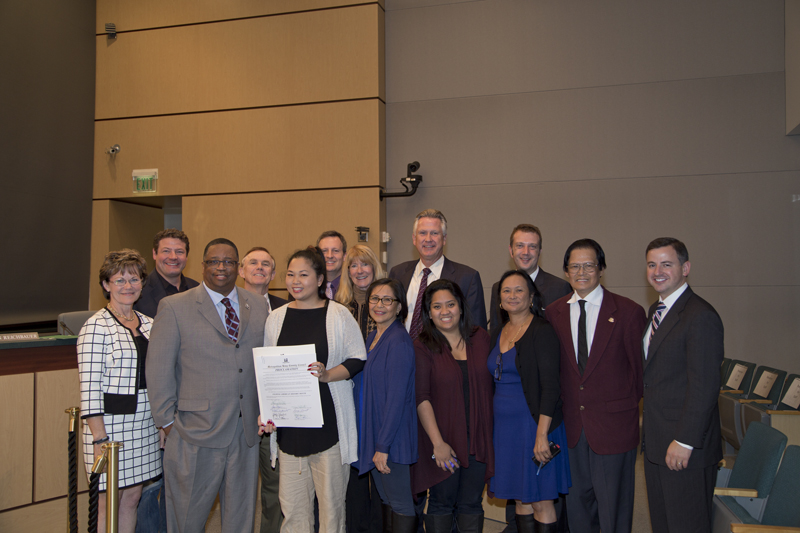 WHEREAS, Filipinos have lived in the United States for over 425 years, beginning with the earliest documented proof of Filipino presence in the continental United States on October 18, 1587, in Morro Bay, California; and

WHEREAS, Washington state is home to the third largest Filipino population in the United States, and Filipino Americans are the largest Asian Pacific American population in the state, with the vast majority making King County their home; and

WHEREAS, Filipino Americans have contributed greatly to the cultural, economic, social, and political life of King County; and

NOW, THEREFORE, we, the Metropolitan King County Council, proclaim October 2015, and every October thereafter, as

DATED this fifth day of October 2015.