Former Senator will serve as caretaker until November election 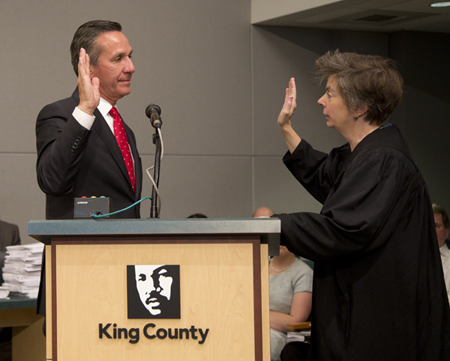 The Metropolitan King County Council has selected Dino Rossi to fill the vacancy created in the Washington State Senate created by the passing of Senator Andy Hill. Rossi was sworn back into office at the King County Courthouse this afternoon.

“I’ve known Dino Rossi for many years and had the privilege of serving with him in the State Legislature,” said Councilmember Kathy Lambert. “He will do an excellent job representing the people of the 45th District and honoring the legacy of Senator Andy Hill.  He was the Senate Ways and Means Chair prior to Andy, so he has the expertise and experience to help deal with many fiscal issues before the state. I’m pleased the process mandated by our state constitution works so well and enabled us to make certain that the 45th District citizens have excellent and very qualified representation in the legislature.”

Rossi became a resident of the 45th District following redistricting in 2010. He served in the Legislature from 1997 to 2003 and served as the Chair of the Senate Ways and Means Committee. Rossi was also the Republican nominee for Governor in 2004 and 2008.

“It’s an honor to fulfill Senator Hill’s legacy from now until November,” said Rossi. “Only two Republican budget writers are still alive and I’m one of them. I look forward to helping the State Senate with the budget and will do everything I can to help us be successful.”

This will be the second time that Rossi has been appointed to the Senate on an interim basis. In 2012, Rossi received the unanimous support of the Council to replace Senator Cheryl Pflug, who had resigned from the Senate.

“Filling the shoes of Senator Hill, even temporarily, is no easy job but I’m confident that Dino Rossi is more than up to the task,” said Councilmember Reagan Dunn. “Dino has both the experience and dedication needed to ensure the interests of the 45th District are well served until November.”

“I look forward to working with Senator Rossi and other legislators to address the pressing issues in King County, including strengthening our public health protections and improving our justice system so that it works for all King County residents,” said King County Council Chair Joe McDermott, who presided over the hearing.

“The untimely passing of Senator Andy Hill has left a very challenging hole to fill in a year where the state must face complex and critical budget decisions, including a solution for education funding,” said Councilmember Claudia Balducci. “With this appointment, the County Council honors the process set out for filling state Senate vacancies while selecting a candidate, Dino Rossi, who brings a wealth of knowledge and history of working productively with colleagues across the aisle.”

All three of the candidates were interviewed by the members of the Council before Rossi was selected. He has announced that he will serve only during the 2017 session of the Washington state Legislature and will not run to finish the term of Sen. Hill.