On the 100th Anniversary of the U.S. entering WWI, Councilmember Reagan Dunn, Councilmember Rod Dembowski, local veterans and family members of those who served, gathered at the King County Courthouse to unveil plaques honoring King County and City of Seattle employees who served in WWI. The plaques are located just outside of the 4th Avenue entrance to the Courthouse.

100 years ago today, President Woodrow Wilson sought a declaration of war to join our allies fighting in the Great War, now known as World War One. In recognition of this moment in history and in memory of the King County and City of Seattle employees who then left their families, jobs, and lives to serve our nation, King County Council Vice Chairs Reagan Dunn and Rod Dembowski unveiled two refurbished bronze plaques at the entrance of the King County Courthouse.

“In the face of danger and discomfort, far away from home, our troops fought for our country and for freedom,” said Dunn. “King County will never forget that sacrifice, and these rededicated plaques serve as a physical reminder of that commitment.”

“As the son of a Korean War combat Veteran, I am personally committed to ensuring we honor the sacrifices of all who have served our nation, including the more than 120,000 veterans who call King County home,” said Dembowski. “I am proud to partner with Councilmember Dunn to honor the legacy of the brave men and women who fought to safeguard the world 100 years ago.”

During the war, more than 60,000 residents of Washington served in the Army, Navy, Marines or Coast Guard including more than 500 employees of Seattle and King County government.

Time and weathering left the plaques in need of repair, so Dunn and Dembowski advocated for funds to restore these pieces of local history. Today’s ceremony rededicated the newly restored plaques so that they may serve as a reminder of service for many years to come.

“It’s an honor to able to take part in events like these especially for veterans of WWI and WWII who led the way,” said Al Zarb of Enumclaw’s VFW Post Hall 1949. “There’s not many of those veterans left and their story must continue to be told.”

Shoreline Vet Dwight Stevens, Jr. is the son of a Veteran who served in WWI. He said the new plaques are a reminder to all of the service and sacrifice of those who answered their nation’s call a century ago.

“This is a marvelous remembrance of the people who laid down their tools and went to war,” he said. “We honor their memory and their service”

To see the newly rededicated plaques, visit the 4th Avenue entrance to the King County Courthouse (516 3rd Ave). The memorial is located on the 4th Avenue side of the building between James and Jefferson streets. 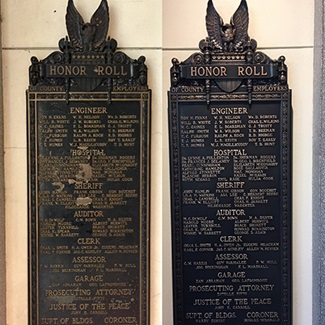 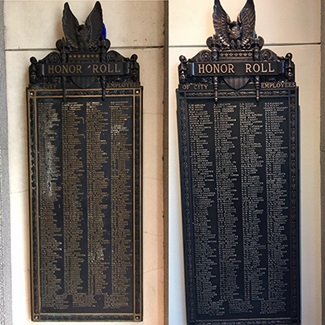 Before and after photos of King County’s newly refurbished plaques honoring King County and City of Seattle employees who served in the First World War.