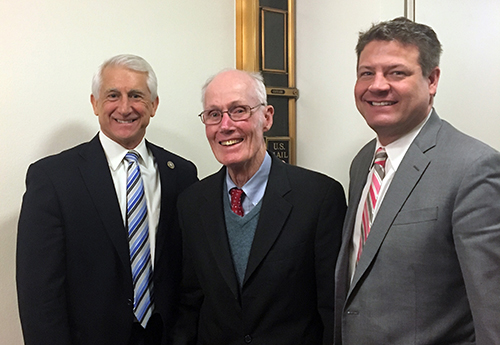 The legislation, authored and championed by Congressman Dave Reichert, concerns a 1.5 million acre landscape that stretches from Seattle to Central Washington.

Currently in Washington, DC, King County Councilmember Reagan Dunn also submitted testimony in support of the legislation. Dunn has been an active participant in the effort since playing a vital role in the county’s acquisition of 226 acres of high-quality forest that was once partially slated for logging in 2014. The move preserved Squak Mountain Forest in the Issaquah Alps.

King County has played a major role in the creation of the Greenway, having invested millions of dollars in land acquisition and recreational development over the past 20 years. Purchasing the land prevented areas from being logged, and instead safeguarded salmon-bearing streams and other wildlife, as well as deep forests, hiking trails, and more.

“The success of Mountains to Sound is a tribute to the tens of thousands of individual citizens whose volunteer work on the ground has contributed mightily towards its attractions and availability,” said Gorton, who represented Washington in the U.S. Senate for 18 years.

When the Mountains to Sound Greenway National Heritage Act was first before Congress in 2014, Dunn and former Councilmember Larry Phillips led an effort to formally show King County’s support.

“Our region is special. From the Cascade Range to the Puget Sound we are truly fortunate to have such a wealth of natural beauty surrounding the place we call home,” said Dunn. “It’s our job to preserve this belt of natural area, especially with the remarkable growth our region is undergoing for future generations. I’d like to thank Congressman Reichert for his continued leadership and hard work on behalf of this important legislation.”

The Greenway connects 1.5 million acres surrounding Interstate 90, stretching from Seattle across the Cascade Mountains to Central Washington. It conserves a healthy and sustainable relationship between land and people by balancing built and natural environments. This natural open space is also surrounded by world-class recreation.

An official recognition of the Greenway seeks to demonstrate the national significance of this landscape, empower partners to work together, enhance fundraising opportunities, and formalize the Greenway coalition’s cooperative management style across the entire landscape.