Board of Health rules and regulations have jurisdiction throughout the county, including within all 39 municipalities and unincorporated areas. 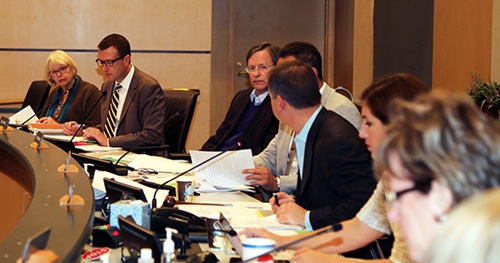 The King County Board of Health has unanimously passed what is believed to be the west coast’s first law requiring stores selling firearms to post warning signs at entrances and cash registers. The regulation also requires the warnings to be posted at firing ranges.

Board of Health rules and regulations have jurisdiction throughout the county, including within all 39 municipalities and unincorporated areas.
First proposed by King County Councilmember Joe McDermott this past summer, the signs will warn of the increased risk of suicide, fatal acts of domestic violence, and unintentional deaths to children in homes where a gun is present.

The signs will also feature contact information for Crisis Connections so that individuals experiencing emotional crisis can access the support that they need. Crisis Connections, based in King County, is one of the oldest Crisis Lines in the nation.

“We need to be open and honest about the harm that guns can cause. This means acknowledging there is risk in owning a gun, often for the people who live in the home that gun is intended to protect,” said McDermott. “The goal of this law is to ensure people are aware of the risk and those who may find themselves in a crisis can quickly find help they need so that it doesn’t end in harm and tragedy for themselves or others.”

The warning signs are last and latest piece of a broad firearms package that was introduced in July by McDermott and King County Councilmember Jeanne Kohl-Welles.

“This is a common sense approach to make people aware of the negative and sometimes deadly consequences that come with gun ownership,” said Kohl-Welles. “It may seem obvious that guns can be harmful to people but sometimes the obvious needs to be stated. If clearly labeling health risks works for alcohol and cigarettes, it can work for firearms.”

Dubbed the King County Gun Safety Action Plan, the package also included requiring gun owners to securely store all firearms. Other components of the action plan authorize a youth-led report on reducing gun violence, require the Sheriff’s Office to destroy forfeited weapons, and form a task force to identify other public health prevention strategies. All of those measures were also passed into law in King County.

The latest available data show more than 700 people were killed by a firearm in Washington State in 2015. This included nearly 150 gun deaths in King County, six of whom were children. That same year, almost half of the suicides in Washington were committed with a firearm. A subsequent study showed suicide and suicide attempts by youth found that in over half of those cases, the gun was owned by a family member who the young person lived with.

The rule will go into effect 30 days after the regulation is signed by the chair of the Board of Health.