Domestic Violence Awareness Month is an opportunity to recognize survivors and to highlight the outlets, from law enforcement to community service providers, available to those trying to escape their abusers. 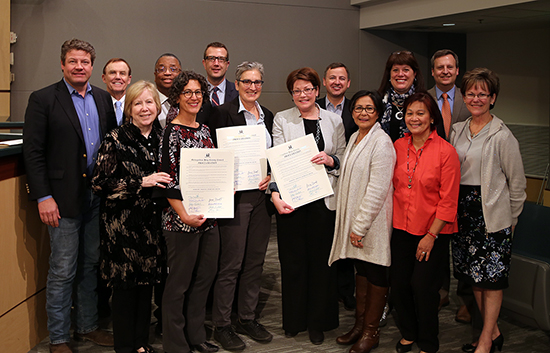 It cuts across all demographics and communities, affecting 1 in 3 women and 1 in 4 men. It disrupts families and lives and can create a cycle that passes it on to future generations.


The impact of domestic violence is widespread; it’s the third leading cause of homelessness for families, and studies have shown that up to 10 million children annually witness some form of domestic violence in the home. For boys who see domestic violence growing up, they are twice as likely to become abusers themselves.  Domestic Violence Awareness Month is an opportunity to recognize survivors and to highlight the outlets, from law enforcement to community service providers, available to those trying to escape their abusers.


Established in October 1987, National Domestic Violence Awareness Month is an opportunity to create a community dialogue about violence, advocate for legislation and law enforcement to protect victims, and to encourage awareness and action against abuse.

“It is especially important to continue to raise awareness of domestic violence because it is, by definition, largely invisible. Domestic violence happens in private spaces, among family members and intimate partners. It knows no geographic boundaries and affects people regardless of race, gender or income level. I am proud of the work we are doing at King County, including establishing the Regional Domestic Firearms Enforcement unit, which was formed to enforce court orders directing abusers to turn over their firearms. This unit is on track to remove almost four times as many guns as were collected in previous years, and will certainly save lives.”
– Councilmember Claudia Balducci

“Domestic violence not only impacts those involved in the violence but also their children, extended family, and neighbors. Male children who are exposed to domestic violence are statistically two times more likely to be abusive in their own homes as adults. It is a social cancer that must be stopped and people should seek counseling for anger and abuse. Anyone experiencing domestic violence should call the statewide hotline at 1-800-562-6025 for help.”
– Councilmember Kathy Lambert

“This month should be more than just raising awareness about an issue. Rather, it has to be the beginning and continuation of a movement that works towards fundamentally reversing the course of a culture that has become overwhelmed by people suffering from intimate violence. The impact of intimate violence can be lifelong and in many cases passed down from one generation to the next, as all family members can be affected. Let’s use this month to break this cycle and work on solutions that make a lasting difference.”
– Councilmember Jeanne Kohl-Welles