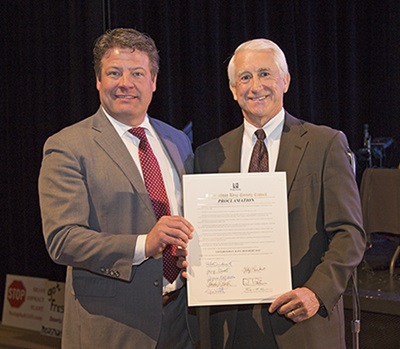 Reichert served for over 30 years in the King County Sheriff’s Office, becoming Sheriff himself in 1997 when he was appointed by then-King County Executive Ron Sims. He was then elected Sheriff for a second term, becoming the first elected King County Sheriff in over 20 years. Reichert was instrumental in the capture the infamous Green River Killer, who murdered dozens of women across the Seattle area, investigating the case for almost twenty years before finally bringing the serial killer to justice.

Following his two terms as Sheriff, Reichert was then elected Congressman for the 8th Congressional District, where he served for fourteen years. During his time in Congress, Reichert was appointed to the Ways and Means Committee, and was subsequently named Chairman of the Subcommittee on Trade.

“Congressman Reichert represented the very same district as my mother, the late Congresswoman Jennifer Dunn, and I appreciated that he continued my mother’s leadership style of bipartisanship and working across the aisle,” said Dunn. “During his time in Congress I was honored to work closely with him to expand the Alpine Lakes Wilderness and to designate the Mountains to Sound Greenway as a National Heritage Area.”

As a Congressman, Reichert utilized his experience as a law enforcement officer to advocate for some of society’s most vulnerable. He was a leading voice in bringing awareness to domestic violence and advocating for the rights of victims. Reichert consistently worked on behalf of underprivileged youth, advocating and directing policy to improve the lives of children who are in foster care, experiencing homelessness, or are otherwise at-risk.

“Dave Reichert has served the people of the 8th Congressional District, and the country, incredibly well,” said Councilmember Kathy Lambert. “We will miss his great leadership in Congress and wish his family the best as they begin this new chapter.”