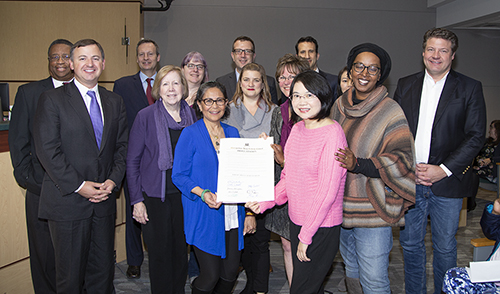 Domestic violence can be extremely difficult to escape, prolonging victims’ suffering and impacting others – children and other family members – along the way. Often, outsiders may spot such abuse even before victims understand what’s happening.

It’s with that in mind that the King County Council on Wednesday proclaimed October as Domestic Violence Awareness Month.

“Domestic violence is a crime that happens all too often, and can completely change the lives of victims, their family, and their community,” said King County Councilmember Kathy Lambert. “It is a severe issue that must be stopped and I encourage the brave survivors to reach out to local resources for help. I want others to know that they can survive this trauma and find success in life. I am very thankful for the work of organizations that focus on domestic violence here in King County such as LifeWire, DAWN, and New Beginnings.”

Domestic violence and partner abuse can take many forms, but it is often part of a pattern involving physical violence as well as intimidation, coercion and other forms of manipulation. The abuser often “takes over” and controls the partner, using their intimacy as a trap.

Studies have found that as many as 10 million children will witness domestic violence each year, and men who witness that abuse as a child are twice as likely to abuse their own partners.

Councilmember Jeanne Kohl-Welles: “Domestic violence continues to pervasively affect the psychological, emotional and physical health of millions of people across the country. As the Chair of the King County Board of Health, I’ve stood up a special subcommittee to explore how to apply a public health approach to this problem so that we can end domestic violence in all of its forms and help people transition from victims to survivors.”

Councilmember Claudia Balducci: “Domestic violence affects many in our community who are already marginalized — people of color, immigrants, youth — and it is not limited to heterosexual or cisgender people. I am committed to working with my colleagues to ensure that domestic violence services are appropriate and inclusive and effectively serve every survivor, no matter their identity or situation.”

Alicia Glenwell, Policy & Special Projects Manager for the Coalition Ending Gender-Based Violence: “On behalf of our over 30 member programs who serve survivors of domestic and sexual violence across King County, we thank the King County Council for using their powerful positions in our community to raise awareness and inspire action to end domestic violence. We look forward to working together, today and every day, to continue building safe and just communities where all people can thrive.”