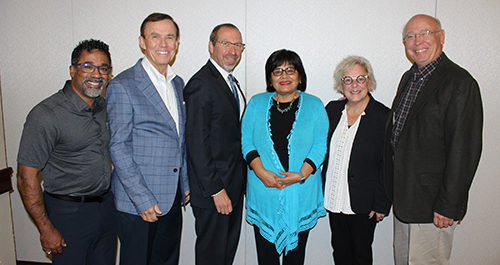 Rogoff provided an update on the Federal Way Link Extension, which is expected to break ground next year. Once completed in 2024, commuters will be able to travel from the Federal Way light rail station to Sea-Tac Airport in 15 minutes, and will be able to reach downtown Seattle in less than an hour. The project is moving forward on securing its federal full funding grant and will be built by Kiewit Construction.

He also discussed the Tacoma Dome Link Extension, projected to open in 2030. The 10-mile extension will have four new stations, including South Federal Way. Rogoff highlighted the early community outreach efforts for this extension to get feedback on potential stations and alignment options.

Lastly, Rogoff discussed the siting of the future Operations and Maintenance Facility in South King County (OMF-S).  Sound Transit is currently looking at three potential sites, two in Federal Way and one in Kent. The final decision on OMF-S isn’t expected to be made until late 2020. Once it’s finished, the facility will create living wage jobs for more than 300 people.