King County Councilmember Reagan Dunn on Wednesday introduced legislation that would establish a waste-to-energy (WTE) advisory committee to dig into how King County could build a waste-to-energy facility to dispose of its solid waste as an alternative to the existing Cedar Hills Landfill. 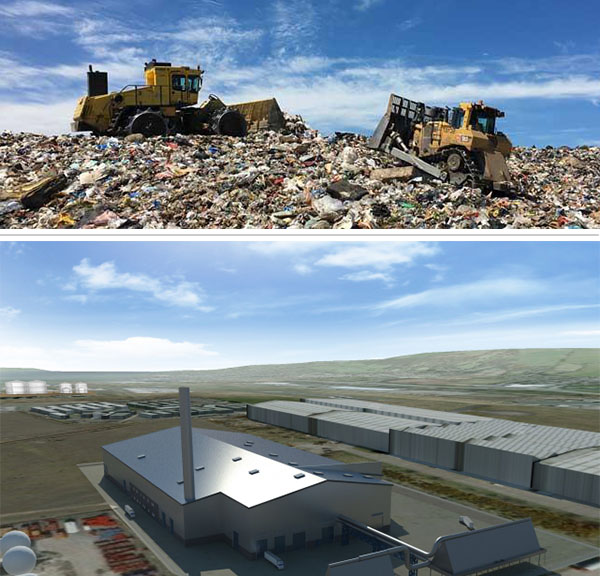 The image above compares the current Cedar Hills Landfill with a rendering of a waste-to-energy facility in Belfast, Ireland.

“King County needs to stop putting our trash in the ground and modernize our waste disposal,” Dunn said. “Over the last decade, the waste-to-energy sector has seen a lot of exciting innovation that makes it the cheapest and most environmentally friendly method available. We need to start now to begin the process of shutting down the massive, odorous landfill and implement a better, cleaner option.”

King County’s Comprehensive Solid Waste Management Plan, approved by the council in 2019, included an amendment sponsored by Dunn requiring King County to find a new a long-term waste disposal method for when the Cedar Hills Landfill reaches its maximum capacity. This is anticipated to happen by the year 2040.

Dunn would like to encourage King County to move toward a waste-to-energy facility, which converts solid waste to recover energy, to be used in forms such as electricity. A 2019 feasibility study commissioned by King County concluded that “WTE facility disposal will provide a significant financial and environmental benefit to the County over WEBR [waste export by rail]."

The idea has momentum within the community near the landfill, who have long advocated for an alternative waste disposal method. “Waste-to-energy is the only option that has a minimal impact on the community and the environment, and it solves our waste stream for years and years to come,” said Janet Dobrowolski, who lives next to the landfill. “It also provides electric and steam energy from a renewable resource. It is clean and has no issues with leachate, odors, or water contamination.”

Many countries across the world rely primarily on waste-to-energy facilities to dispose of their solid waste, in part because they have little open space for landfills. They are particularly popular in Japan, Scandinavia, and Switzerland. There are dozens of waste-to-energy facilities across the U.S., including a mass burn facility that Palm Beach County in Florida opened in 2015. About 12% of municipal solid waste in the U.S. was converted in WTE facilities in 2018, according to EPA data. But half of all waste was still put in landfills in the same year.

"From Cedar Hills to Vashon Island citizens are asking their elected leaders in King County to find solid waste solutions that meet our aspirations to be recognized as world leaders in the protection of the environment. Burying garbage in a hole was never a good idea, and it's a mistake we should not repeat,” said Dr. Tag Gornall, a Vashon Island resident. “With the modern technology available to us today, we should be ashamed of the possibility that future generations will inherit from us a continuing legacy of burying garbage in holes. We owe it to those future generations to find smarter and greener solutions."

The new committee’s transition plan would include research on the cleanest, safest, and most cost-effective technologies available; discussions of the experiences of other jurisdictions that have implemented waste-to-energy technologies; a list of outstanding questions that need answering and actions that need to be taken; the identification of potential barriers and how they could be overcome; a consideration of how a technological change would be coordinated regionally; and a discussion of the viability of performing a pilot project before fully implementing a new technology.

Members of the committee would include industry, regulatory and environmental experts, who would be appointed by the King County Council. The committee would also be required to engage with community members who live near the Cedar Hills Landfill.

The legislation will be referred to committee at the Tuesday, July 13 meeting of the King County Council.