The King County Council unanimously recognized and proclaimed solidarity with protesters – particularly women and girls – in Iran who have taken to the streets following the September death of Mahsa Amini in police custody.

The King County Council on Tuesday unanimously recognized and proclaimed solidarity with protesters – particularly women and girls – in Iran who have taken to the streets following the September death of Mahsa Amini in police custody.

“I am proud to stand with our local Iranian-American community and allies who support the unprecedented movement underway in Iran to support the fundamental human rights of the Iranian people — especially Iranian women and girls,” said Councilmember Rod Dembowski, who sponsored the recognition. “Our unanimous Council recognition honors the courageous leadership of the women and girls, and all citizens of Iran as they seek to have their fundamental human rights recognized and protected. We endorse their movement and it’s clarion call: Women, Life, Freedom.”

Amini was in custody of Iran’s Guidance Patrol, its religious morality police, after she allegedly violated the country’s dress code for women by wearing a hijab improperly in public in Tehran. Reports suggested that, contrary to official state accounts, she died after a severe beating by police. Following her death, protests erupted in more than 80 cities, towns and villages across Iran, led largely by women and girls.

“My deepest appreciation to the King County Council and Councilmember Rod Dembowski for this resolution,” said Representative-Elect Darya Farivar. “I’m extremely proud to be the first Iranian American woman elected to the state legislature, overall, our first Middle Eastern woman, and I do not take this lightly. Come January I plan to introduce a similar resolution in the House, will fight for our community to have an institutionalized voice, and for our experiences to be counted.” 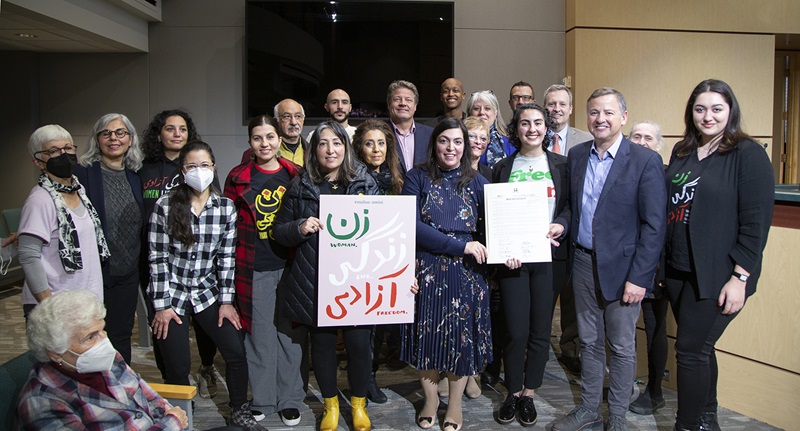