A historical library of information and documentation

The Clerk's Office developed the ECR Program, which includes both technological solutions and re-engineered business processes that facilitated the move from a paper-based system to a more "paperless" court record. 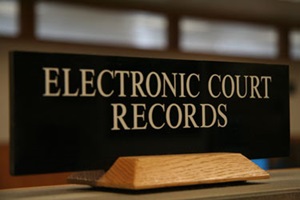 "Justice Denied? Not in Seattle!"

As early as the 1980s, the Clerk's ability to provide timely access to court documents became impaired due to volume, increasing costs, and continual budget cuts. The demanding, day-to-day logistics of moving literally tons of paper were costly and relentless. Reliance on a physical court record meant only one person could access the record at a time, and only during specific hours while the Clerk's Office was open. This inefficient system created competition for access among judges, attorneys, and the public.

ECR has resulted in a paradigm shift in King County, where the legal original record is now an electronic document. Beginning with a pilot scanning project in 1997 and continuing today, the ECR Program has provided the public and legal community in King County with a more reliable and efficient court records system and, as a result, greater access to justice.

In 2007, the Clerk's Office was awarded an Innovations in American Government Award from the Ash Center for Democratic Governance and Innovation at Harvard's Kennedy School. Recognized as a more efficient, cost-effective solution for addressing the cumbersome paper-based court record storage and retrieval process, King County’s ECR Program received $100,000 to share its practices with courts across the nation. Part of the award was designated for creation of this online library, documenting the history and philosophy of King County's ECR Program.