Why Implement an Electronic Record?

As early as 1992, the King County Clerk’s Office began considering the possibility of moving away from paper for its official court records. At that time, the clerk received an average of 23,000 paper pages filed every day. Paper filing could be inefficient and unreliable, and only one person at a time was able to access a court record. King County also had plans to build a new Regional Justice Center, including an additional court house and clerk’s office, to be located miles away from the superior court.

The clerk's concerns about the ongoing inefficiencies of paper records, as well as the logistics of maintaining and making available court records from two different geographic locations, led the department to focus on imaging technology as a first step toward developing an electronic record.  Visionaries in the clerk's office implemented a pilot scanning project with great success. The success of this pilot encouraged clerk's office staff to continue on the path toward a more fully electronic court record.

Thanks to the ECR system, we are more efficient and we are able to serve the court, litigants, and the public better than before." 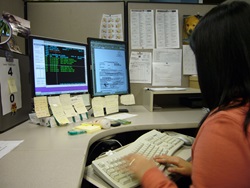 The initial scanning pilot project was in part a response to a budget crisis in 1997. When the Clerk's Office lost its budget for microfilming archived records, the department was forced to find an alternative. Renting scanning equipment and completing the pilot project not only saved  money, but it also resulted in the imaging of over 2.5 million pages, as well as invaluable experience that laid the groundwork for the next phases of ECR. Throughout the timeline, ECR’s success repeatedly rested on the positive opportunism of its leaders.

The success of the archival scanning pilot gave the Clerk's Office a springboard from which to continue the transition to an electronic record. The transition was skillfully guided by a Master Plan, written in 1998. The Master Plan succinctly describes the background, groundwork, and vision of the ECR project, all of which provided an excellent and prescient framework for planners and participants over an extended development period. The Master Plan helped ECR managers stay focused, helped prevent scope creep, and it provided resources when problems arose.

Over the next ten years, the King County Clerk's Office made the transition from paper to electronic court records. This process included creating, communicating, and implementing technological, procedural, and legal solutions for a wide variety of stakeholders, including attorneys, clerks, judges, and the public. The enormity of the work and challenges were matched only by the enormity of the resulting benefits. Moving from a paper to an electronic record meant creating and sustaining an entire cultural shift.