The county successfully opened its new data center in November 2009. The Data Center Relocation Project was undertaken due to concerns about the adequacy of the electrical, HVAC and fire suppression systems, and server capacity at the county’s main data center in the Seattle Municipal Tower Building (SMT). The county also needed to vacate SMT because as of March 2007, the data center was in a month-to-month lease. All work on the project was completed in September 2010.

The county relocated its data center to a facility built to its specifications at the Sabey Data Center in Tukwila. The new facility opened on schedule, but milestone delays occurred. Completion was on budget, but secondary fiber and decommissioning costs at SMT significantly more than estimated. This required spending 75 percent of contingency. The total budget for the project was $20.3 million; the actual cost of the project was approximately $19.3 million.

Appropriate operating procedures for the new facility are in place. Most user agencies report satisfaction with the new location. The new data center is capable of eventually housing all of the county’s network servers. This project relocated about half of them. The executive is working on a new project to relocate additional servers to the site in response to council provisos included in the 2011 budget.

The Auditor has followed up on the report to evaluate implementation of our recommendations. See the most updated information below.

Prior reports on this project are found below. 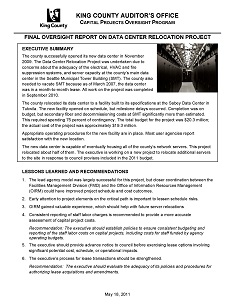 This report provides a final assessment of the Data Center Relocation Project (Data Center or project), which relocated King County’s primary data center from leased space in the Seattle Municipal Tower (SMT) to leased space in the Sabey Data Center in Tukwila. The project was completed in September 2010. In addition to assessing the final scope, schedule, and budget results, this report summarizes project lessons learned based on feedback from major stakeholders, the project team, and data center customers.

The project team successfully delivered the final scope but the lease acquisition process could be improved. See the full report for more details.

The new data center opened on schedule, but delays occurred in three major project elements one of which increased project costs. See the full report for more details.

The project was delivered within budget but several project elements cost significantly more than estimated. See the full report for more details.

The executive should establish policies to ensure consistent budgeting and reporting of the staff labor costs on capital projects, including costs for staff funded by agency operating budgets.

The executive should evaluate the adequacy of its policies and procedures for authorizing lease acquisitions and amendments.

Click on the image(s) below to view the follow-up reports.

The oversight reports provide a review of the status of scope, schedule, budget, and risk for the Data Center Relocation project. The reports are found below in chronological order starting with 2011.

Tom Wood and Tina Rogers conducted this work. If you have any questions or would like more information, please call the King County Auditor's Office at 206-477-1033 or contact us by email KCAO@kingcounty.gov.