Across the Green River watershed, habitat restoration projects are under way in a coordinated effort to half the native chinook salmon's long and steady decline toward extinction. 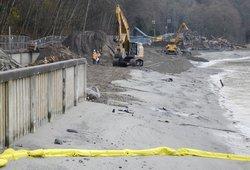 Across the Green River watershed, habitat restoration projects are under way in a coordinated effort to halt the native chinook salmon’s long and steady decline toward extinction.

“The bottom line is that whether it’s the freshwater environment of the river itself, or the nearshore environment of Puget Sound, salmon simply don’t have enough high-quality habitat,” said Doug Osterman, watershed coordinator of the Green-Duwamish and Central Puget Sound Watershed Ecosystem Forum.

Chinook numbers have been on the decline for several decades across the Puget Sound basin, leading to their protection in 1999 by the federal Endangered Species Act. Loss of quality habitat in both the freshwater and marine environments is a major hurdle to chinook recovery.

In the Green-Duwamish watershed, local governments have come together with other stakeholders to address the significant loss of salmon habitat in both freshwater and marine areas.

One of the largest habitat restoration projects to date is under way along the Puget Sound shoreline in Burien’s Seahurst Park, where crews are tearing out a decades-old concrete seawall that has altered the marine environment by starving the beach and nearshore areas of gravel.

“The marine nearshore plays a significant role in the chinook salmon’s lifecycle,” Osterman said. “Out-migrating juvenile fish tend to hug the shoreline to both feed in the shallows and to avoid predators as they gain size to begin their journey to deeper offshore areas of Puget Sound and the Pacific Ocean.”

More than 1,000 feet of seawall was removed from the park in 2005, and an additional 2,800 feet of shoreline is scheduled to be restored during this current phase of work, which includes returning healthy ecological functions that create natural habitat for fish and wildlife.

Restoring degraded shoreline habitats in areas such as Seahurst Park is paramount to the recovery of chinook salmon, not only for the Green River population that enters the saltwater in nearby Elliott Bay, but also for numerous other chinook populations of rivers throughout Puget Sound.

Habitat restoration work has also been completed in the upstream and estuary areas of the Green-Duwamish watershed, where the salmon are born and stay before making their way to Puget Sound.

In 2011, 1,800 feet of levee was set back to allow the Green River to migrate on 21 acres of floodplain that had been cut off from the river, creating new channels and slow-water habitats.

Downstream near the river mouth, two acres of shallow intertidal habitat has been restored to provide new habitat where juvenile chinook can feed and grow before continuing their journey to saltwater.

Osterman said the Watershed Ecosystem Forum’s long-term goal is to build the annual return of Green River chinook to a robust and sustainable level of about 27,000 wild fish.

In 2009, only 207 wild fish were observed on the spawning grounds – the lowest count since 1981. While counts of wild spawners have improved modestly in recent years, the overall downward trend in salmon returning to the Green River over the past 50 years spotlights why local governments have committed to taking the most important, science-based recovery actions possible to increase fish numbers.

Learn more about the salmon-recovery efforts in the Green-Duwamish Watershed at http://www.govlink.org/watersheds/9/.