With the completion of the largest in-river flood protection project in the six-year history of the King County Flood Control District, hundreds of homes and businesses near the Green River in Auburn now have enhanced flood protection for this flood season - and for decades to come.

Flood Control District, hundreds of homes and businesses near the Green River in Auburn now have enhanced protection for this flood season – and for decades to come.

Crews have wrapped up the major work of building a new levee that stretches for nearly one mile along the western bank of the Green River through several Auburn neighborhoods.

Tearing out the leaky old, constrictive Reddington Levee and building the new levee farther back from the river makes room for flood flows to fan out and lose their erosive force, while creating areas for improved fish and wildlife habitat. 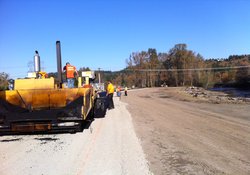 The setback levee project was managed by the Water and Land Resources Division of the King County Department of Natural Resources and Parks, and funded by the Flood Control District at a cost of more than $17 million. Scarsella Bros., Inc. was the general contractor.

“The Reddington Levee is a prime example of the Flood Control District’s mission to invest in safety improvements for people, property and communities along our rivers,” said Flood Control District Chair Reagan Dunn. “This new levee not only provides greater protection for the thousands of residents and workers who live and work in Auburn but also helps to protect vital transportation infrastructure from Green River flooding.”

“This project improves flood protection for hundreds of families and businesses,” said Flood District Supervisor Pete von Reichbauer. “In order to improve our job market and provide stability, it is vital that we continue to address our aging infrastructure needs. The completion of the Reddington Levee Setback project is an important step forward in protecting the safety of our residents.”

With all that soil out of the way, crews constructed the new setback levee, installed nearly 4,300 feet of drainage pipe, and placed 48,000 tons of rock armoring along the levee.

On the wide expanse of open ground between the new setback levee and the river channel, crews placed 340 logs and planted native vegetation – consisting of more than 18,000 trees and shrubs – to help hold the soil in place and provide habitat for fish and wildlife.

Learn more about the Reddington Levee setback project at www.kingcounty.gov/rivers.

The King County Flood Control District is a special purpose government created to provide funding and policy oversight for flood protection projects and programs in King County. The Flood Control District’s Board is composed of the members of the King County Council. The Water and Land Resources Division of the King County Department of Natural Resources and Parks develops and implements the approved flood protection projects and programs. Information is available at http://www.kingcountyfloodcontrol.org/.